This is Part V of a multipart post. I'd suggest you go back and start at the beginning (Part I).

Let's pick up where we left off fisking this article in New York Mag:

Where George W. Bush and many red states are phonics supporters, New York is dyed-in-the-wool whole-language country. Influential programs at Columbia and Bank Street College developed variations of the approach before it even had a name. Balanced Literacy, or at least the way it’s practiced in New York, is largely the brainchild of Lucy Calkins, founder of the Teachers College Reading and Writing Project, who is looked upon nationally as a godmother of whole-language learning. 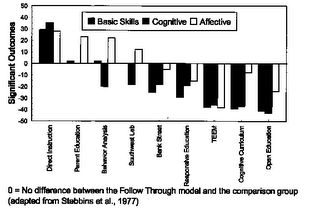 See how the Bank Street Model (fifth from left) significantly underperformed the performance of the control group (performance = 0) and vastly underformed a well-designed the basic skills model (first from left).

Ms. calkins is fortunate there is no such thing as educational malpractice, because the results of this study would be plaintiff's exhibit 1.

A National Institutes of Health–created commission of Ph.D.’s came down squarely on the side of phonics in a 2000 report, influencing the Bush administration to crack down—some say improperly, perhaps even scandalously—on non-phonics programs.

Is there anything worse than the lazy journalism inherent in the use of the "some say" device.

That argument doesn’t persuade Klein. He’s cultivating mindful, curious readers, he’s said, not vanilla word-decoders. “I’m quite convinced the curriculum we’re using, with inquiry-based learning, will serve our students throughout the city well over time,” he says. In particular, Klein likes that Balanced Literacy looks a lot like the reading approaches in successful school districts on the Upper West Side and the Upper East Side and in most of the city’s elite private schools. In a system where so many great schools coexist with so many horrible ones, Klein is convinced that the solution is not to adopt the practices of the worst schools but to export the best practices of the successful ones and end the educational apartheid.

This is soft-headed thinking at its finest: “I’m quite convinced” based on absolutely nothing.

In the summer of 2002, he hired Klein, a fellow outsider, as his chancellor, and Klein recruited a career superintendent named Diana Lam as his deputy for instruction. It was Lam who brought in Balanced Literacy. Neither Klein nor Bloomberg knew much about the program at the time, except that Lam had used it in cities where test scores went up, like San Antonio, Texas, and Providence, Rhode Island.Nothing more embarrassing than picking an expert that doesn't know what they're doing. And, it would appear that those gains in test scores were largely, if not totally, illusory. But, our hapless journalist accepts the assertion uncritically.

Then the article finally gets to the phonics side of the debate. But, we soon get the following statement:

Parents in the more politically connected parts of town didn’t need to be won over by Balanced Literacy, since more than 200 elementary schools already used it.

"Using" is not the same as "liking." "Tolerating" would be the more appropriate word, and that's only because these skills will almost never have the same rates of reading failure you see in the low SES schools no matter what reading program is in place. This is due to the SES/IQ correlation and the familial support system the high SES kids can fall back on.

Cognition experts like Harvard’s Steven Pinker have argued for some time that while learning to talk is an organic process you can generally learn on your own, like walking, reading is more like riding a bike or driving a car. Someone has to take you through the initial steps and get you over the unfamiliarity of the experience; then you have to spend time on your own perfecting the skills until it becomes second nature. The question at the heart of the Reading Wars is how much direct instruction do children really need.

These results included many low-SES students, but also included quite a few middle-class kids as well.

In 2000, the [National Reading Panel] released its “meta-analysis” and concluded that in order to learn to read, all children must master five separate skills: phonemic awareness (separating words into distinct sounds, like the c, a, and t in cat), phonics (learning the sounds letters and letter combinations make), fluency (the ability to read with speed and accuracy), vocabulary (learning new words), and comprehension (understanding what you’re reading). These basic skills were nothing new to most people who taught elementary-school English. What the NRP added to the debate was the notion that direct instruction of these skills was the only proven method for teaching reading.

The conclusion (that the NPR added the notion that direct instruction of skills is the only proven method) in the last paragraph is contradicted by the fact that that NPR's analysis was merely a meta-analysis. The NPR didn't conduct any new research, it just evaluated old research. (Actually, it threw out 90% of the old research because it didn't conform to even the looser standards we permit in social science research.)

What the old research clearly showed was the direct instruction was the only model proven to be effective. The research had been ignored by our clueless educators. The NPR has merely reminded us that the research existed and that our educators were abiding by it.

Continue reading the final article in this series. Conclusion: Part VI.
Posted by KDeRosa at 11:29 AM