Rothstein responds to the flood of criticism he received when the NY Times parroted his silly views. He backpedals away from his statement that schools can't do "much better" without complementary reform and then sets up a series of strawmen to be knocked down.

In short, given that, as Mr. Finn asserts, children's time influenced by families and communities exceeds the time they are influenced by schools "by a multiple of four or five," I am puzzled that he fails to agree that serious and successful efforts to substantially narrow the achievement gap must include social and economic policies to improve the circumstances of family and community life, as well as policies to improve the quality of schooling.

I suspect the reason he fails to agree is because it remains un unproven theory that "serious and successful efforts to substantially narrow the achievement gap must include social and economic policies to improve the circumstances of family and community life." There's no evidence that supports Rothstein's assertion. And, it's not for lack of research either.

Take a look at this graph of overall performance of Title I kids in the experiment. That looks like about 50th percentile performance to me. And, all it took was school reform. 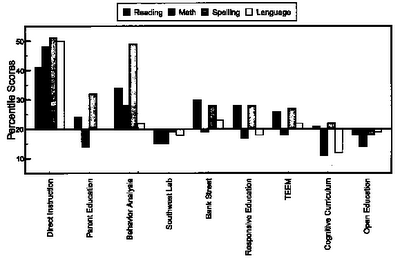 Here's another tidbit we learned from Project Follow Through: "The increase[d] amounts of money, people, materials, health and dental care, and hot lunches did not cause gains in achievement. Becker (1978) observed that most Follow Through classrooms had two aides and an additional $350 per student, but most models did not show significant achievement gains."

So much for throwing money at the problem which is exactly what Rothstein wants to do.

Another way of thinking about the claim that good schools can "close the achievement gap" is that if all disadvantaged children attended good schools, and graduated, on average, with average middle class levels of achievement, the vast social inequalities that now pervade American society would disappear.

That's a strawman argument. We don't know of anything that is capable of eliminating the " vast social inequalities" that Rothstein has in mind. Unless, you count the social equality some unfortunate countries got under communist rule. I don't exactly see anyone making a mad dash toward that, especially the people who once lived under that system.

As I pointed out in this post, the "vast social inequalities" we have in the U.S. is not exactly the grinding poverty that Rothstein's trying to portray. We have too many fat poor people to take that argument seriously nowadays.

At present, for example, the average achievement of black and white children in America differs by about a full standard deviation, or about 30 percentile points in a distribution, on most standardized tests

Coincidentally, that also happens to be the magnitude of the IQ gap. That's the big elephant standing in the room now isn't it? IQ correlates highly with academic performance and to a lesser extent SES. All our efforts to raise IQ and through educational and/or SES interventions have been failures. Similarly, our efforts to raise academic performance through SES interventions have also been fruitless. You do the math.

Social scientists generally consider an intervention to be extraordinarily successful if it has an effect size of 0.5, or more than 15 percentile points. Such an impact of good schools would truly be extraordinary Â– my guess (without evidence) is that the best school reform, even including the extended school time that Mr. Finn advocates, might aspire to an effect size of 0.3, or about 10 percentile points.

That would have been a bad guess. In project Follow through the effect size was close to a full standard deviation. Subsequent research has validated those results.

So what? An effective instructional intervention will be able to raise the tide of all boats. See here. At the end of the day we'll still see a bell curve with respect to student achievement. We'll also still see an achievement gap between certain groups. But since we will have shifted student achievement to the right by about a standard deviation, the sheer number of academic failures will be greatly diminished. And, that's about all we can ask of any school.

It would be useful and important to know whether such detailed comparisons of student performance can identify schools that substantially "beat the odds" and beat them to an extent that lifts students to middle class achievement levels. I know of no accounts of "beat the odds" schools that have attempted, or been able, to do this.

As long as effective schools remain islands in a sea of poor performers, the extent and number of schools that "beat the odds" will be scarce. This is due, at least in part, to the high mobility rate (upwards of 25%) we see in low SES neighborhoods. That means that most high performing schools are inundated with low-performing transfer students from low-performing schools who are in need of extensive remedation and who greatly contribute to the peer effect problems we see not to mention dragging down the performance of the entire school.

Nonetheless, just look at the performance of most any KIPP or DI school and you'll see what can be done.

The Rothstein article goes on and on from there, but its mostly a rehash of the same tired arguments. Project Follow Through demolishes almost all of his argument that isn't a strawman -- at least those parts of his argument that fall under the purvey of education.
Posted by KDeRosa at 11:12 AM