Last week Sol Stern penned an article for Fordham detailing the blunders committed in the 2006 Reading First investigations and the media's mis-reporting of same.

The article was well written, but didn't contain much new reportage, such as the Slavin/Obey connection. A year and a half ago, I reported much of what is found in Stern's article right here on this blog. In fact, many of Stern's points are identical to points I made.

Stern's article was critical of Bob Slavin, creator of Success for All a program that received little Reading First funding. Dean Milot, of EdBizzBuzz, has posted Slavin's somewhat tepid response. Slavin claims that Stern left out all the juicy parts. I disagree. Stern did include the juicy parts. Stern left out the gristle. But, apparently, Slavin likes gristle.

1. Stern says nothing about the fact, prominently reported by the Inspector General (IG) and the press, that leaders of the Reading First Technical Assistance Centers, Edward Kame’enui, Deborah Simmons, and Sharon Vaughn, were also authors of the Scott Foresman basal text and authors of Voyager Passport, and yet were making key decisions from the outset that favored basal textbooks and Voyager Passport.

During the April 20, 2007 Hearing, IG Higgins confirmed that no one involved in the RF scandal had any actual financial ties or conflicts of interest with respect to any basal reading program. Furthermore, there was never evidence adduced in any IG report that Kame’enui, Simmons, or Vaughn made decisions "key" or otherwise that favored Voyager Passport or any other reading program. How could they have? Less than 10% of the states even specified the actual names of reading programs in their Reading First applications. Even if there was a conflict with the reviewers, they had no way of knowing which programs the states were actually selecting. Moreover, my understanding is that Kame’enui, Simmons, or Vaughn are authors of the DIBELS testing instrument which was subsequently included as a component of Voyager Passport. They were not actual authors of the reading program, nor did they derive profits from the reading program

In addition, there is no evidence that Voyager Passport failed to qualify for Reading First funding under the loose "based on SBRR" standards contained in the statute. In fact during the hearing IG Higgins expressly indicated that he had not even looked into this issue.

This is an exceedingly slim grounds for a finding of impropriety. To the extent that this is Slavin's first and most prominent point, you can imgaine the strength of his remaining points.

2. Stern says nothing about the fact, reported by the IG, that in the early Reading First Academies, when state leaders were learning how Reading First would operate, they were exposed to speakers representing only Direct Instruction and selected basal textbooks, and were given notebooks full of information on DIBELS and no other assessment.

This falls under the dubious "appearance of impropriety" standard since no actual harm or foul ever resulted from this activity. Nor was this activity prohibited under statute or any other regulation. As one of the only three reading programs with validated reading research, it's difficult to see how DoE would be prohibited from using Direct Instruction as an exemplary program. Nor is DoE obligated to demonstrate every potential exemplary program. Demonstrating a program does not amount to endorsing it. And there is no evidence adduced that any program was actually endorsed by DOE.

According to the IG, there was no actual infraction here, merely the appearance of an infraction. And, even that is a stretch.

3. Stern says nothing about the fact, reported by the IG and the press, that the Simmons & Kame’enui “Consumer’s Guide,” based in detail on elements of Direct Instruction, was given by Department officials as the de facto official criterion for “scientifically based research”. The Oregon review of reading programs, based on the guide and carried out in part by University of Oregon researchers who were authors of one of the programs, was frequently recommended by the Department as a list of programs to be used under Reading First.

Reading First is a program directed to at-risk students. DI has more validated reading research with respect to at-risk populations attributed to it than any other reading program, including Slavin's SfA. So, if the Oregon researcher did base their criteria on DI, that would seem to be appropriate. However, based on this summary report it would appear that the DI reading program (Reading Mastery Plus) was not always the highest scoring reading program evaluated by the Oregon Researchers. Take for example the first grade evaluation for discretionary items: 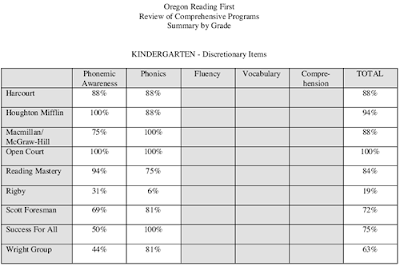 Reading Mastery comes in fifth. Success for All appears also to have done well in the evaluation, at least in the early grades. perhaps that accounts for the fact that SfA was on the RF approved list in 28 states.

Again, I'm not quite sure what the infraction is here even if what happened is exactly what Slavin claims. Basing the criteria on the most research validated reading program and including that program on a list of programs meeting the criteria does not seem to be prohibited. And, if this amounts to "recommending" or "endorsing" a program then those recommendations and/or endorsements weren't very effective. Less than 3% of states adopted the program despite all the alleged improper recommendations and/or endorsements.

4. Stern fails to mention how DIBELS became the de facto national assessment of Reading First in most states, enriching Roland Good and the University of Oregon, one of the Technical Assistance Centers. Under Department funding, Good and Oregon colleagues reviewed a variety of reading measures and gave positive ratings to DIBELS.

I'm not as familiar with the DIBELS part of the scandal, but it appears that Good actually donated all the royalties he received from DIBELS.

One official, Roland H. Good III, said his company made $1.3 million off a reading test, known as DIBELS, that was endorsed by a Reading First evaluation panel he sat on. Good, who owns half the company, Dynamic Measurement Group, told the committee that he donated royalties from the product to the University of Oregon, where he is an associate professor.

Moreover, no evidence was ever adduced in any IG report showing that any state was actually steered to adopt DIBELS.

I'm not sure about Stern's initial claim; however, there is no evidence of record that DoE steered any state away from SfA. Remember, just because SfA was eligible for RF funding does not mean that they were entitled to it. States had the discretion to exclude any program from RF funding they wanted. DoE could only preclude states from adopting reading programs that did not meet the statutory requirements. DoE could not force a state to include any reading program in RF. In my opinion, excluding any validated reading program, such as DI or SFA from Rf funding, is scandalous. But it's a scandal at the state level, not the federal level.

I'm going to skip the last two points since point six makes little sense and I have no way of disproving the assertion point seven.

Slavin has had a weak case from day one and nothing in this latest letter changes that fact.
Posted by KDeRosa at 3:02 PM

Also, in Kame'enui's defense, we need to remember that DIBELS is available for free, on the U of O website. Kame'enui testified that the the commercially available DIBELS was created in response to demand from school districts, who a) didn't want to bother with printing off a website; and b) felt that the product needed more packaging and glitz in order to be more successful at pitching it to their decision makers.

Shouldn't the issue be, not the personalities, but what happens to the children?

In Virginia, urban high-poverty Richmond adopted a “science-based” reading and math programs in 2001. The county where I taught, wealthy Fairfax, did not, and refused to participate in Reading First.

Richmond adopted reading programs recommended by the National Institutes of Heath, the institution that has made the quality of American medicine the envy of the world. Is it any surprise that scientific studies can help avoid difficulties learning to read?

On this issue, what does the DATA say about the impact on children, especially poor children? Isn’t that what counts?