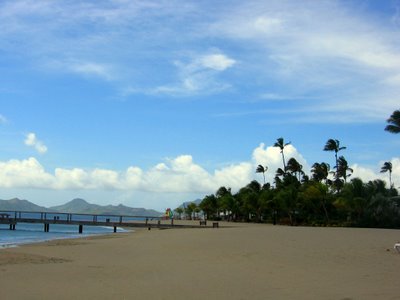 Sorry for the light blogging, kids. I've been on vacation in sunny Nevis for the past week. Should be back on my game shortly.
Posted by KDeRosa at 9:14 AM 3 comments:

Not So Stinky Research Part II

(This is part II of this post. Part I can be found here.)

In the last post, we discussed how we'd need to increase student performance by at least a full standard deviation in order to comply with NCLB. Bear in mind that this is considered to be a large effect size improvement, which are very rare in education research.

So are there any current educational interventions that are capable of improving performance by such a large amount?

Let's limit the discussion to research that has at least a moderate effect size (> 0.5 SD), statistically significant results, and at least three well-designed studies.

Believe it or not there are a few interventions that meet this criteria.

Fortunately, the American Institutes for Research has already done much of the hard work for us by evaluating the research for many popular elementary school interventions. AIR published the results in its November 2005 paper CSRQ Center Report on Elementary School Comprehensive School Reform Models. I went through the report and found three interventions that met my criteria.

The CSRQ Center reviewed 37 quantitative studies for effects of Accelerated Schools on student achievement. Three studies met CSRQ Center standards for rigor of research design. The Center considers the findings of these three studies conclusive, which means that the Center has confidence in the results of these studies. About one third of the results reported in these studies demonstrated a positive impact of Accelerated Schools on student achievement, and the average effect size for these significant results is +0.76.

The AS studies can be found in Appendix A of the report.

The CSRQ Center reviewed 115 quantitative studies for effects of SFA on student achievement. Thirty-three of these studies met CSRQ Center standards for rigor of research design. Upon review, the Center considers the findings of 31 of these studies conclusive, meaning the Center has confidence in the results reported. The findings of the other 2 studies are considered suggestive, which means the Center has limited confidence in them. Overall, the 33 studies report a mix of results showing positive effects and no effect of SFA; of the 91 separate achievement test findings across the 33 studies, just over half (52%) demonstrate a statistically significant positive impact. The average effect size of these positive effects is +0.63.

The SFA studies can be found in Appendix U of the report.

The CSRQ Center reviewed 56 quantitative studies for effects of DI on student achievement. Twelve studies met CSRQ Center standards for rigor of research design. The Center considers the findings of 10 of these studies conclusive, which means that the Center has confidence in the results reported. The findings of two studies are considered suggestive, which means the Center has limited confidence in the results. The findings in the conclusive and suggestive studies showed mixed results: some studies demonstrated a positive impact of DI on student achievement and other studies showed no significant effects. About 58% of the findings reported in the studies that met standards demonstrated positive effects; the average effect size of those significant findings was +0.69.

The DI studies can be found in Appendix K of the report.

I also know that Gary Adams performed a meta-analysis on the DI research and examined 34 rigorous studies. Here's what he has written about the results.

So, there are at least three educational interventions that are capable of achieving moderate to large effect size improvements on student performance, at least in the elementary grades.

Of course, all three of these interventions completely overhaul how schools are run, changing almost every aspect of the school. Maybe such radical change is necessary.

Does anyone else know of any other valid educational research with similar moderate to large effect sizes? The comments are open.
Posted by KDeRosa at 9:44 AM 13 comments:

Research that Isn't So Stinky

Is there any decent Ed research asks John from AFT? The simple answer is yes but not much of it.

These are the generally accepted standards for evaluating social science research.

So now let's pretend that there were some easily implementable educational intervention that could raise the performance of all schools by 0.84 SDs. Even with such a large improvement, about 20% of students will perform below the present 50th percentile . In Title I schools, half the students would still not make the cut! In order to raise performance so that only about 5% of students perform below the 50th precentile, we'd need some combination of lowering standards and raising performance by another 0.80 SD. Most states have already dutifully complied by lowering standards quite a bit under NCLB.

Realistically, schools are going to have to raise performance by at least a full standard deviation (and count on some help from the states) in order to comply with NCLB. And even then, the Title I schools will still be failing since they will have about 20% of students not making the cut. This is the most unfair aspect of NCLB, but until we're ready to admit that student IQ affects student performance such policy discussions will be off limits.

We'll take a look at some of the existing Ed research in part II of this post to see if we know of any educational interventions that are even capable of increasing student performance in the neighborhood that we need to comply with NCLB.
Posted by KDeRosa at 12:33 AM 2 comments:

I almost fell over as I read this editorial in the Atlanta Journal-Constitution. The editorial discusses Ed research and how lousy it is:

The public risks whiplash keeping up with the latest twists and turns in the education research. One day, block scheduling is a fresh approach that all high schools ought to adopt. The next, it's derided as stale and moldy.

These conflicts reflect a seldom acknowledged truth in education: There's a lot of uncertainty about what works and what doesn't.

In the meantime, schools invest millions of dollars in innovations and reforms that sound impressive, but don't amount to much more than a new coat of paint on a rickety old house. And when those reforms don't deliver the promised results, schools cling to them anyway because they've spent too much money and time to walk away.

Wow. That's pretty good. A journalist actually understanding the quality of research. How often do you see newspapers acknowledge that research isn't sometimes all that good. Usually, they just accept the researcher's conclusion uncritically, especially if it coincides with their ideological agenda, and play-up whatever data is handed to them.

The emphasis on student achievement in the federal No Child Left Behind Act and the requirement to use data to substantiate outcomes are prompting researchers to devise more reliable ways to capture effectiveness.

"The biggest revolution caused by No Child Left Behind is the revolution in education research," says Georgia State University's Gary Henry, a scholar in educational policy and evaluation. "We are getting better at figuring out what works. But what we are seeing is almost nothing that has a very large effect."

Even when the research shows a gain, it's a very small gain produced under the best of circumstances. That's because most reforms only tug at the edges and don't address central flaws in public education: A teacher's track record of improving student performance is hidden from public view, and that performance is not used as a factor in teacher salaries.

Now go back and re-read the part I emphasized; it's probably the most important thing you'll read this week. If you're a journalist or edu-blogger, understanding this little truism will result in you making fewer silly statements, such as touting your favorite edu-theory which inevitably lacks any indicia of success.

Here are a few simple rules to live by:

3. Poorly designed experiments are neither science nor reliable. The big shortcomings here are lack of comparison groups, lack of randomization or pre-testing of the experimental groups, not accounting for attrition efects, control group participation in the intervention, the presence of selection or confirmation bias, and other methodological flaws. To put it bluntly, most education researchers do not know how to conduct valid experiments.

4. Results cannot be extrapolated beyond the parameters of the experiment. This one is a biggie. Experiments are only valid for the conditions under which the experiment is conducted. So, if the experiment properly concludes that reducing class sizes to 13 students may benefit kindergarten age students, it is improper to extrapolate those results and claim that similar class size reduction might benefit all K-8 students or that a class size reduction to 20 students would have a similiar effect. Such conclusions are not supported by the evidence.

There is very little education research (and subsequent advocacy) that meets all these criteria. Typically, when any serious meta-analysis of education research is conducted, about 90% of it has to be discarded as lacking. Journalists and edu-bloggers should be very leery relying on shaking education research. You don't want to make the make the mistake the new think Tank Review Project made this week by relying on shaky research to make over-hyped points criticisizingthe Reason Foundation's universal preschool report and wind-up the laughing stock of the edu-sphere.

Follow-up Post: Ed Research that Isn't So Stinky
Posted by KDeRosa at 8:06 AM 12 comments: