I'm in the process of wading through the 100 or so comments generated in my five part Economics for Edupundits to address the issues raised. But, in the meantime I wanted to address the following issue raised by Dick.

Who is examining the nuts and bolts of instruction—which are the determinants of formal instructional accomplishments—or the lack thereof? No one. Well, almost no one. But that’s a whole nother story.

By and large in the US, instruction remains a black box [scratch black, make it a white box] between Standards and Standardized Test.

Dick is, of course, right.  Instruction largely remains a black box.  But why does it remain a block box?

The answer is that there is little incentive or reward in our present system for cracking open the black box.  And, here's why.

Students can be divided into the easily educable and the difficult to educate.  Let's deal with the former group first.

For the easily educable, there's no real need to crack open the instructional box.  These students are going to learn regardless of the instruction being delivered. There's no need to understand why your instruction seems to be working with this group.  Just accept that whatever you do, provided it's not too loony, will work pretty good and pick something and a style you find personally enjoyable.  If you're likable and organized, the students will like you and life will be good.  Sit back and collect your paycheck and enjoy your summers off content with the knowledge that the measuring stick used to determine what the students have learned is a glorified IQ test, the SAT or ACT.

If you run a private school, charter school, magnet school, or any other school with selective admissions, the situation is largely the same.  Your main goal is to weed out all the difficult to educate students and only admit  the easily educable students, preferably the easiest to educate and hence the ones most likely to perform well on the SAT/ACT.  The better you can separate the wheat from the chaff will largely determine your reputation and therefore the tuition you can charge.  If you need to differentiate yourself from your competitors, there are many non-instructional areas that can be attacked much more easily than the instructional areas.

There is so little competition in the current system, schools have largely adopted the carve up the market approach, establishing their little minimal competition, non-profit fiefdoms and enabling them to leased a comfortable existence.

Don't expect innovation to come from this segment of the market.

Now for the difficult to educate students, this is where cracking the instructional black box would bring the most benefits.  But where is the incentive to actually do so?

There is no incentive at the political level.  Political careers are too short.  Long-term accomplishments (like instructional reform) don't matter.  The game is to appear to care, enact some nebulous reform, throw some money at the problem, and hope you are out of office (or have moved onto a better office) when the chickens come home to roost.

And the reforms aren't going to come at a lower level because below the political level everyone is a wage slave.  The wage slave's only incentive is to collect the next paycheck.

Instructional reform requires entrepreneurship.   But what incentive does a Vanderbilt have to enter the market to compete with all Fulton and Livingston monopolies?

So, tell me all you Kenysian market steering types, I'm looking at you Dick, how do you propose steering the educational ship to not only unlock the secrets of the instructional black box, but also to assure that schools follow the revealed secrets instead of, you know, sticking with the status quo?
Posted by KDeRosa at 5:26 PM 25 comments: 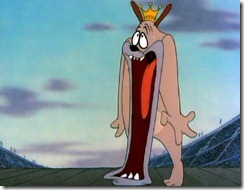 
Clearly, I side with Hayek.  And, apparently, so did the economy.
Posted by KDeRosa at 9:55 AM 5 comments: