A plan for failure

I'm sure the Civil Rights Coalition for the 21st Century means well, but the executive summary of their latest report, A Plan for Success: Communities of Color Define Policy Priorities for High School Reform (pdf), makes it clear that they don't know the first thing about education and why minority students underperform.

The report is long on lofty goals and short on credible ideas how to achieve those goals.

The coalition's main plan is -- wait for it -- that schools serving minority populations need more funding because they are underfunded.

Why are there such blatant inequities in the distribution of education opportunities in America? One key problem is that many high-poverty schools, which predominately serve students of color, lack the funding and resources of wealthier schools and districts. A recent report noted that in thirty-one of forty-nine states studied, school districts with the highest minority enrollments received fewer resources than districts with the lowest number of minorities enrolled (Carey 2004). Another study determined that in schools where at least 75 percent of the students were low-income, there were three times as many uncertified or out-of-field teachers teaching English and science than there were in wealthier schools (Wirt et al. 2004).

Last I checked, warmed-over Marxism does not have a long history of success, yet it always seems to get trotted out front and center by organizations like this. However, that's not the main fault of this suggestion. The main fault is that it is almost categorically untrue that schools that serve minority populations have less funding than the average school district. Schools that serve high minority populations are typically found in big cities and big city schools are some of the most well-funded schools in the state. About the only schools that are funded better than big city schools are schools in the wealthiest of suburbs. This is a red herring, because there is no correlation between instructional spending and student achievement. Here's a plot of those variables for Pennsylvania's 501 school districts. 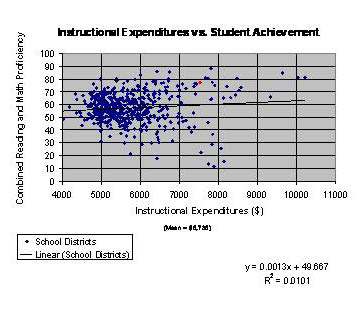 Notice how R2 is 0.0101. That indicates that the correlation is random. The scatter plot shows that pretty clearly when instructional expenditures are between $4000 and $7000. Then we see a somewhat odd phenomenon when instructional expenditures are over $7000, representing funding at about the 95th percentile. At this high level of funding you see two distinct trends.

Increased funding is not the answer to the woes of schools serving minority and low-income populations.

The report also suggests that academic achievement can be increased by attracting better teachers. That's problematic as well and I'll save that discussion for a future post.

The report also lists a bunch of vague bromides, lacking specifics and any indicia that enacting such bromides have been successful in the past. But that's pretty much it. More money and non-specific bromides are the answer to our education woes. Why do these organizations even bother?
Posted by KDeRosa at 9:19 AM

Very good post. These hard stats need more airplay than they are getting.

Could you give a link to the source for the data you plotted? I'd love to use this in my Quantitative Reasoning class. You can email it to me directly if you want (castingout9s [at] gmail [dot] com).

Obviously the issue of "total funding" is only part of the equation.

Here's an extreme hypothetical: School A is in an older high-maintenance building with poorly designed classrooms, in an area where costs are extremely high

School B is a new school with well designed classrooms, good built in electronics, in a low cost area.

Obviously, finding them equally wil give A less to spend on education than it will give B.

I have heard folks allege that inner city schools are much more expensive to run, as they're in older buildings, etc. I don't know how true that is. I'd be extremely curious to find atistics that account for things like capital costs, cost of living (which affects teachers) etc. Have you seen such a thing?

Robert I'll dig up the excel spreadsheet that contains the data I painstakingly copied from S&P's schoolmatters.

I've done the same thing for Ohio (over 600 districts) with about the same results. But look at the upper left and lower right boundaries of the data point spread. Each of these trends upward in performace with greater spending. So, among the state's most efficient districts, more money correlates with higher achievement. Among the state's least efficient districts, more money correlates with higher achievement. Now the question becomes: "why are state taxes raised to fund a 'thorough and efficient system' of public schools going to demostrably inefficient districts?"

Just to play devil's advocate, one could legitimately claim that schools which primarily serve minorities should get more funding to compensate for less-educated parents or fewer external resources at their disposal.

Then the greater funding would be a sop to the complainers since the stats make it clear that funding != results.

In fact, if there aren't measurable benefits from increasing funding then funding, and the taxes that generate the funding, should be reduced. After all, if greater funding doesn't mean better results then less funding is unlikely to produce lesser results so why not leave the money in the hands of local home-owners and business owners where it will do some good?

And while the idea that higher-cost urban-area school buildings are likely to require more maintenance dollars is credible it's important to remember that all expenditures in a public school district are the result of political compromises. With that in mind, who speaks for the buildings?

this is totally off topic, but thought it was right up your alley. I thought you might be interested in reading this. Mike's comments are particularly egregious in my humble opinion.