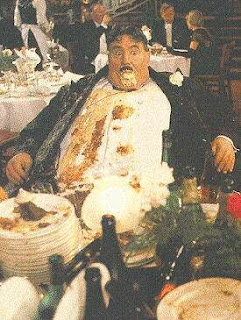 Jonathan Kozol has a post at the Huffington Post that is pure comedy gold. The title says it all.

Why I am Fasting: An Explanation to My Friends

Kozol is fasting to protest NCLB. Except that it isn't a fast; it's a partial fast, whatever the hell that is.

This morning, I am entering the 67th day of a partial fast that I began early in the summer as my personal act of protest at the vicious damage being done to inner-city children by the federal education law No Child Left Behind, a racially punitive piece of legislation that Congress will either renew, abolish, or, as thousands of teachers pray, radically revise in the weeks immediately ahead.

The one good thing about NCLB and all those nasty tests that the perpetually pre-prandial Kozol hates is that we now have lots of school and district level disaggregated data on student achievement. And, the data does not support Kozol's crackpot ruminations.

NCLB hasn't done damage, vicious or otherwise, to schools. NAEP data shows that NCLB hasn't had much of an effect at all, good or bad, on student achievement at the macro level. Kozol can decry "teaching to the test" and "narrowing the curriculum" all he wants, but that doesn't change the fact that these questionable practices don't seem to be having any more of an adverse effect on student achievement than the equally questionable teaching practices that preceded them. The only difference being that Kozol likes the latter and hates the former.

The poisonous essence of this law lies in the mania of obsessive testing it has forced upon our nation's schools and, in the case of underfunded, overcrowded inner-city schools, the miserable drill-and-kill curriculum of robotic "teaching to the test" it has imposed on teachers, the best of whom are fleeing from these schools because they know that this debased curriculum would ever have been tolerated in the good suburban schools that they, themselves, attended.

In Kozol-speak, one extra test a year means "mania of obsessive testing."

Some schools may have responded to NCLB by "teaching to the test," but the choice was theirs. I can't lay my finger on a single provision of NCLB which forces such a regime on any state, district, or school. But, then again, bad-decision making has been a hallmark of public schools since well before NCLB was enacted. In fact, many would say that this bad decision making was the "root cause," if you will, of the accountability provisions of NCLB.

"Drill and kill" is education's "sick and tired." Two words that must always go together to create a handy false dilemma. Let me suggest that if your drilling is resulting in killing, you don't know how to drill or teach properly. Same goes for "robotic" teaching. If an actor can perform from a script in a lively and engaging manner, then so should a teacher be able to perform from a similar script.

And, as far as suburban schools tolerating a particular "debased curriculum," all I know is that based on the data, at-risk kids are fairing just as poorly in suburban schools as they are in "underfunded, overcrowded inner-city schools." The debasing is in the eye of the beholder and I think Kozol's eye has been addled by his partial food strike.

P.S. Be sure not to miss the obsequious edu-blogger, Jim Horn, sucking up at the foot of the hungry master in the comments. "Thank you for your eloquent commitment to what's right for so many years ... A trusted lieutenant, should you need one. Jim Horn" What a jackass.
Posted by KDeRosa at 2:05 PM

I only have a minute or two, but I can't help myself.

I read HuffPo, DailyKos, etc. daily even though I shake my head at ~102% of the content. The Kozol piece was highlighted in their daily e-mail.

I find his decision to fast absurd. I understand how deep his commitment runs - he's certainly devoted his life to the education fight, and that's worth praising - but he really should've asked, "WWCSD?"

Which is, of course, "What would Cindy Sheehan do?" After you answer that question, cross every bit of it off your list of possibilities.

I find the "partial fast" such a problem because it's so laughable as to undermine any legitimacy his policy points may have. It's hard to take someone seriously when they behave like a third-rate, wannabe sit-com protester - he's more professional than that [so I thought] and I was surprised.

I, too, was pleased that I went through the comments [I usually don't on sites that large]. The gem about "partial immolation" made me laugh out loud, as well as Jim Horn's bizarre hero worship.

Kozol is such a useless piece of shite. I recently stopped in the DePaul University bookstore and checked out some of the required reading for Ed students…Kozol, Freire, Foucault, The Real Ebonics Debate …what a sorry state of affairs…

Jim Horn, and his sidekick Judy Rabin, do not allow comments on their blog, "schoolmatters".

Well, my biggest complaint with Jim Horn is that he's hardly a blogger at all. Copying/pasting content from other sites and articles isn't much of a contribution to the debate, even it is prefaced by a one- or two-sentence intro from Horn. I find it a way of saying, "Here's what I'm reading, here's what I think. Coincidentally, it's also what you should read and think! I provide this service because you're obviously too dumb to do any of this yourself."

I stopped taking him seriously when I saw the tendentious question he asked his students to write about on an exam this last semester - he posted the student's response on his site but I can't seem to find it. It was the type of charged pseudoscholarship that depends heavily on political viewpoint rather than substance. That's no way to go about education reform. Maybe I'm wrong about him, though... he did use the term "Lieutenant" in his plea to Kozol. I'd have bet a kidney on him using "Comrade" instead.

Then again, I'm sure Jim Horn, PhD dismisses everything I write because I'm not a current classroom teacher and hold his qualitative methods to a high standard. I do know that I'd rather have this guy working on ed policy:

And for a guy who demands accountability, transparency and the rest from everyone in government, I do find it a little odd that he isn't receptive to feedback or discussion on his site.

So I'm not the only one to notice Jim's propensity to cut and paste content and bound it with substance-free snark.

Yes! In fact, the teacher's script is usually far more forgiving than the actor's. It does, of course, make the teacher's job more demanding, but teachers whine more about it than is warranted.

Mike Antonucci has point of view on Kozol's partial fast. I'd suggest not reading the piece while eating unless you enjoy wiping food off your monitor.

Let me concur with the Antonucci warning - and the comments on schoolmatters as such mean spirited crap.

It is no wonder it takes hundreds of years to change education with fodder like that.

Why didn't Reg Weaver think of that--a partial fast to protest inadequate professional development for NEA members! Oh, yeh, instead of demanding accountability for professional developers, they sued in Pontiac v Spellings. So what does that do for his credibility relative to Kozol?