Charles Barone stopped by in my last post and commented:


Spending varies greatly WITHIN districts, between schools. Money follows teacher salaries, and the highest paid teachers tend to be in the schools with the highest SES students.

With the possible exception of the well-funded Philadelphia and Pittsburgh school districts, most of Pennsylvania's school districts tend to be small, usually with one high school and a couple of elementary/middle schools. That's not much room for within district variation. I think we're going to lose much by looking at spending on a district basis, rather than a school basis.

As luck would have it, there is data for Teacher Compensation in the data set. Here's the definition given:

So, let's see what the data says about teacher salaries flowing to the high-SES districts. Let's compare teacher compensation to the percentage of low-SES students. 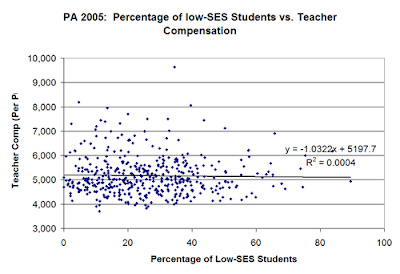 Again, we get a near random distribution. The correlation is weak between teacher compensation and the number of low-SES students in the district. 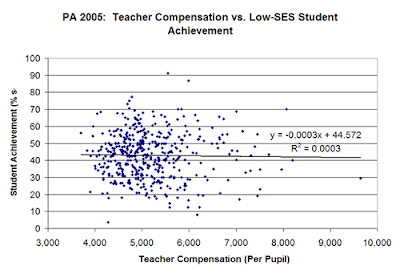 Once again we see a very weak correlation. Seems that low-SES students with lower paid teachers perform about as well as those with higher-paid teachers.

I'm sure the causation here is complex. I'd guess that over-paying for bogus credentialism plays a role inflating salaries with little gain to show for it, overwhelming the higher performing teachers that leave the poor districts for greener pastures.

I wonder how many of the people who criticise economists for having an overly-simple materialistic view of the world also think that more money will automatically improve educational outcomes.

Your data here confirms my suspicions, back from teenage years, that schools don't have much in the way of good mechanisms for identifying effective teachers, so paying teachers more will not have any impact on teachers' effectiveness. Roughly the same range of abilities will be hired both times.

I don't know that schools even have effective means of identifying good teachers after they've been hired and have been working for years.

"I'm sure the causation here is complex. "

Yes, doubtlessly. I think money might be part of a solution (though, social respect could be as well), but just throwing money around will do little to help.

We know that experienced teachers within a school are paid higher salaries with each year of experience(as per the standard teacher contract).

In my view, newer teachers (myself included) were frequently assigned to the 'worst' classes - low performing students (often with behavior problems) that the veteran teachers didn't want to teach. Some districts also require additional certification and/or experience to teach AP classes.

My conclusion: Although school or district wide variations in teacher salaries do not correlate with student achievement, it still may be true that lower-paid teachers are teaching the lowest performing students within any given school.

Given that there is usually no relationship between teacher performance and teacher pay this is should be the expected outcome.

"My conclusion: Although school or district wide variations in teacher salaries do not correlate with student achievement, it still may be true that lower-paid teachers are teaching the lowest performing students within any given school."

Doesn't this imply that the districts are poorly deploying their teachers? or that they have some goal, and its not student achievement (at least of low ses students)

Robert: Thanks for your feedback. To answer your question, I think it's probable that districts are poorly deploying their teachers.

Instead, teaching assignments within a district or school were generally doled out on the basis of seniority (including tenure and district transfer options), friendliness w/ the principal, and the teacher's threats to quit or transfer if not given a preferred assignment.

The teachers with the best seniority (and best relationships with the principal) were given the "best" classes, while newer teacher and/or teachers not favored by the principal were given classes with lower performing students and more behavior problems.

I personally wonder at the wisdom of this, particularly with such high rates of new teachers leaving the profession. Now that I'm an attorney, I never see novice attorneys in a firm given the hardest cases. In fact, firms use the opposite approach, and with good reason. It's an odd situation in teaching, where usually your first years are hardest and the work gets easier as you stay in the profession.

Side note: I also noticed that newer teachers usually got the MOST preps (e.g. different classes to teach each day). In one middle school, a novice colleague of mine had 4 preps (of 6 periods), while the most senior teacher had only one. This was fairly typical in the schools where I worked.

Now that I'm an attorney, I never see novice attorneys in a firm given the hardest cases. In fact, firms use the opposite approach, and with good reason.

Right. There are consequences for performing poorly in law firms. Clients leave. And, the more capable associates are typically snatched-up to staff the more difficult matters. The focus is to make the client happy.

In schools, the well-being of the students is not the primary consideration.

I have heard the same thing from a number of teacher friends. Teachers with more seniority tend to get the bright/gifted kids. The new kid on the block gets the most difficult (or the LD kids). It's like they're dumping them.

Teaching the strugglers and problem learners is just too "draining" for many teachers, I've been told. As the parent of one of those slow learners, I find that attitude very disheartening.