I have two more charts related to my earlier post on school expenditures and student performance.

For the first chart I calculated the differential between total student pass rate and the total pass rate predicted from the regression between percentage of economically disadvantaged students and pass rates. (Basically this crudely controls for amount of economic disadvantage in a school district.) Then I divided the pass rate differential by the standard deviation to arrive at a z-score so you can more clearly interpret student achievement. Then I plotted this z-score against the differential between the total expenditures for a school and the median total expenditures ($10711.5). (Does that make sense? Let me know.) 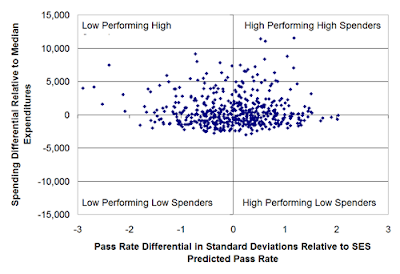 For the next chart I did the same thing. this time, though, I used the pass rate for economically disadvantaged students only since this is a better indicator of how well these districts do with at-risk students. The results are similar. 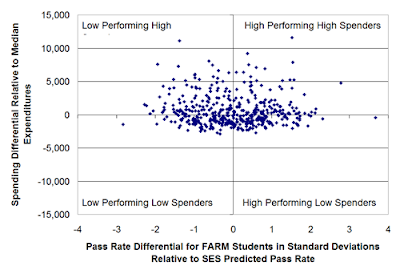 It should be clear from these charts that at these funding rates student achievement is not affected by school expenditures. There are plenty of schools that perform well with low expenditures and plenty that fail even with high expenditures.
Posted by KDeRosa at 6:20 PM

I think it is important for you to clarify that the high performing schools with low funding perform well on a RELATIVE basis.

They do not perform well on an absolute basis.

Anon, I don't see how this data leads to the conclusion that higher funding is needed to improve student outcomes.

What absolute basis are you using?

How do you measure education performance on anything other than a relative basis? The only yardstick we have is what humans have, at some point in time and space, learnt. The more data we accumulate the more we can tell about what is possible with good quality teaching, but I can't see how we could ever get to a stage where we know, absolutely, the limits of what can be achieved.

Why spend more money if it doesn't lead to any improvement?

Well, Ken, if expenditures have little to do with student performance, you need to address the next question: What organizational variables DO they correlate with?