HuffPost Education: Condemned to Repeat History One Blog Post at a Time


HuffPost Education is designed to be a hub for education news and trends -- and will be home to a spirited, ongoing conversation about what's gone wrong with America's schools, and what needs to be done to fix them. We'll have topical takes from an eclectic mix of stakeholders in the education debate. Among those already lined up to weigh in: Secretary of Education Arne Duncan, Davis Guggenheim, Bill and Melinda Gates, John Legend, New York City School Chancellor Joel Klein, Newark Mayor Cory Booker, and Geoffrey Canada, whose inspiring work at the Harlem Children Zone is featured in Waiting for "Superman".

Finally.  A one-stop outlet for every dopey opinion on education.  In the immortal words of Flounder: This is going to be great.
Arianna’s inaugural letter sets the tone:  wall-to-wall nitwittery.


Education has always been the great equalizer in America. The path to success. The springboard to the middle class -- and beyond.

No it hasn’t. Up until the ‘50s, most students exited the education system after a few years and found gainful employment.  That was the springboard to the middle-class.


It was a promise we made to our people. A birthright we bestowed on each generation: the chance to learn, to improve their minds, and, as a result, their lives.

An unfulfilled promise.  One meme you are sure to read over and over at HuffPo Education is how poverty and minority status prevent kids from learning.  Nothing wrong with the schools, the problem lies within in the kids.  This provides a nice segue to the next meme.


But something has gone terribly wrong with our education system, and this failure has profound consequences for our nation's future -- both at home and as we look to compete with the rest of the world in the global economy. 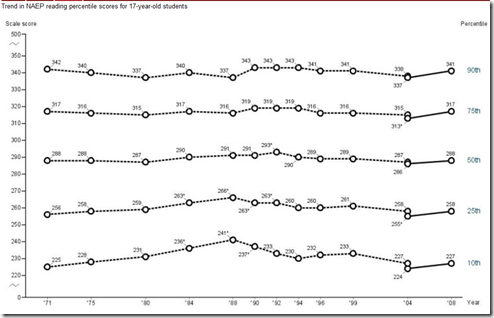 Don’t worry about raising your hand; just shout it out.

That’s right. There was never a golden era in education.

The only thing that has gone terribly wrong in education was for taxpayers. 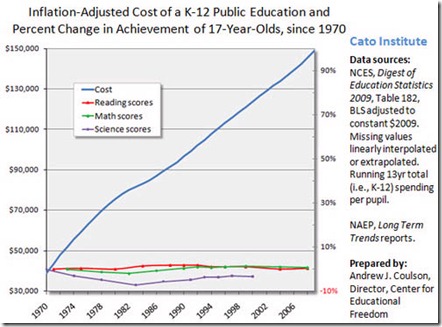 
Decade after decade, as predictably as a school bell, every election season candidates promise to transform our schools -- and, just as predictably, they fail to do so. And this failure cuts across party lines. Instead of fundamental reform, we get grandstanding and broken promises and reform in name only.

Perhaps it’s time to take control back from the politicians.  It’s not like they were always in control of education.


As a nation, we've slowly grown accustomed to our educational system's persistent failures, content to point out the occasional jewel spotted amid the dung: a marvelous charter school here, a high-performing inner-city academy there. We've allowed that old Washington motto to carry the day: "If it's broke, don't fix it."

What?  I dare anyone to jibe this paragraph with the last.  How can we have slowly grown accustom to persistent failure when every election season politicians feel compelled to promise to transform our schools?
It’s reform after dopey reform.  It’s not that improvement isn’t needed; it’s that the reformers have been educationally naïve.  And what does that say about the status quo lovers?


And when it comes to saving our children -- and our future -- there is not a moment to waste. Our nation's education crisis demands "the fierce urgency of now."
That urgency, and the opportunity presented by America's Education Moment, are what animate HuffPost Education.

Wait a second.  Isn’t this how we go in the mess in the first place.  Isn’t this how the Progressives sold government-run education to us 100 years?  No proven ideas; just the urgency of now.  Right out of the fascist’s playbook.  And, look where that got us.

As philosopher George Santayana put it:


Those who cannot remember the past are condemned to repeat it.

Sadly, it takes a good education to know such things.
Posted by KDeRosa at 10:24 AM

I've been invited to post on the new HuffPost ed site. My first post, Doomed by poverty?, will argue that it's disastrous to assume poor kids can't learn. I think it will go up today.

The belief that poor kids can't learn is indeed disastrous. But the belief is so strong that researchers statistically "adjust" for it in alleged value-added measurement. If they were to also adjust for "reading ability" in math tests the bottom would fall out of the relationship.

The practice is cruel and inhumane for both kids and teachers. It's led to the suicide death of one excellent Los Angeles teacher, and the wrong demoralization of many other LA teachers.