In the comments to Tying Up Loose Ends Kate raises some great issues that I've been meaning to get to.

I would be interested in seeing how well all the students (the entire range) performed using [DI] when tested a year later; in other words, what is the long-term retention of the subject?

DI does work across the entire range of students. Thousands of students went through Project Follow Through, some of them in typical middle class schools, so we have lots of data on how well DI works with various students. Here's a pretty graph of some results. 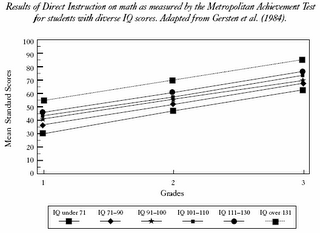 So DI works well with at least students with IQS from 71 through 131.

This figure shows the students’ performance on the Metropolitan Achievement Test. The growth rate for all groups of students corresponds to one grade equivalent for each year in school. These results provide evidence that Direct Instruction is appropriate for, and effective with, a wide variety of individuals including those with low IQ scores, those with IQ scores in the average range, and those with high IQ scores. In addition, because children in this study were taught in small homogeneous groups (having students with relatively the same skill levels), the gains of students with lower IQ scores were not made at the expense of other students nor the other way around.

The lines are parallel, suggesting that the same rate of the students in achievement was realized for all students. This outcome is partly an artifact of the priorities of the DI model, because it focused disproportionately on the lower performers, those students less likely to succeed. With more emphasis on the higher performers, their performance could have been accelerated more dramatically.

And there are other studies that reached the same conclusion:

Tarver and Jung [1995] reported that the Direct Instruction program was equally effective for lower and higher performing children who participated in the study. Other studies provide additional evidence that Direct Instruction programs accelerate the learning of high-performing students in language (Robinson & Hesse, 1981), reading (Schaefer, 1989; Sexton, 1989), and science (Vitale & Romance, 1992).

Now, let's deal with the retention issue. DI is a mastery learning program. Mastery learning is based on the principle of overlearning to automaticity. In DI there is lots of distributed practice. Lots of distributed practice leads to overlearning. Ovelearning leads to automaticity and retention of knowledge against the ravages of time. And, this is what the research on DI bears out.

And let's finish up by hammering the last nail into the misguided learning styles meme with some post-Brophy research.

[D]espite its common appeal and widespread acceptance, reviews of controlled research studies have consistently failed to find any relationship between instruction and learning styles (Snider, 1992; Stahl, 1999; Stahl & Kuhn, 1995). That is, there is no empirical evidence that matching instruction to a student’s so-called learning style results in better outcomes for the student than instruction that is not “matched.” The idea is simply not supported by research findings.

Attempts to prescribe specific teaching approaches based on measures of learning
styles have systematically failed. However, it is clear that effective teaching does depend on a much more focused approach to adjusting instruction to the needs of individual students. Students’ instructional needs are based on the skills that they currently possess. Direct Instruction places a high value on continually adjusting students’ placement in programs, pace of lesson coverage, and amount of repetition on each activity based on students’ performance. This approach eschews the hypothetical and elusive characteristics of learning styles and instead focuses on students’ needs that are clearly seen in their performance and are directly relevant to making specific adjustments in instruction.

Did I miss anything?
Posted by KDeRosa at 10:49 PM