[Bracey] produced statistics showing that schools with less than 10 percent of their students in poverty, outscored students in all the industrialized nations in reading and science and were third in math.

In schools with 25 percent of their students in poverty the U.S. led the other nations in reading and science.

So it appears that “our most affluent kids” are not getting “their lunches eaten” but instead are eating a few foreign lunches.

I always feel a little dirty after reading a Bracey analysis, so I don't want to dwell on this too long. Which is just as well since Neal is merely trying to establish the fact that affluent schools tend to perform better than less affluent schools-- a fact that no one seriously disputes. he just happens to be overreaching in trying to suggest that our affluent schools outperform equivalent foreign schools. There is no data that confirms that shakey premise.

Next, Neal jumps to a few unwarranted conclusions.

Bracey correctly assumes that the nation’s top students generally come from families that are not in poverty. His figures bear that out. When all American kids, including those in poverty, are compared to the industrialized nations, the U.S. students fall below the international average.

You better not tell that to Bracey, he thinks U.S. schools are the cat's pajamas.

You've earned your education wings if you've already figured out where this argument is going ...

That's right kids, we're going to Kozol country because Neal is about to blame all the U.S.'s education woes on poverty.

(I will mercifully skip the part of editorial where Neal uses a book full of questionable scholarship to give the misleading impression that the U.S. is full of Dickensonian levels of grinding poverty. Let's just say that Neal doesn't understand how poverty statistics are calculated. Let's also stipulate that there are people in the U.S. who we consider to be "poor" even though their incomes are larger than the average European's income without including government benefits like welfare, food stamps, EIT credits, and the like.)

When most poverty is factored out of U.S. public school performance, U.S. schools rank No. 1 in the world. Since the U.S. has the highest childhood poverty among the competing nations, what does that say about the schools? About the nation? 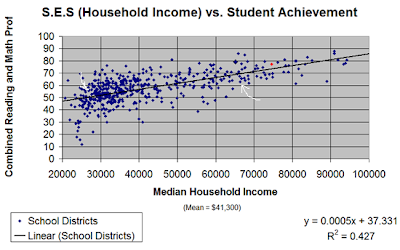 So for the sake of moving this argument along, let's pretend that Neal actually showed the correlation between SES and student achievement.

Of course, Neal still has a little problem in that he's confusing correlation for causation. Neal thinks that because he can show a correlation between poverty and achievement that poverty causes lower student achievement. That causation, of course, has not yet been proven by anyone. Ever. Anywhere. Kozol's assertions to the contrary notwithstanding.

If the federal government, in this case represented by the NCLB, wants to improve the school system, it should work on taking kids out of poverty, instead of trashing the schools for failing to bring up all test scores.

No need to improve school systems. They're doin' just fine. Cancel NCLB and start shoveling money out to the poor (which, of course, won't lower the number of poor people at all because a) we don't count government transfers in poverty statistics and b) poverty is determined as a certain percentage of income below the median income).

The findings are not surprising. Right here in Tulsa, we have known for years that there is a direct correlation between school performance and family income.

You have only to ponder what would happen if by a snap of the fingers, we could transfer entire student bodies from high-poverty schools to schools in prosperous areas. Say, let’s move the McLain High School students to Jenks High School and vice versa.

Wonder what would happen to the test scores? 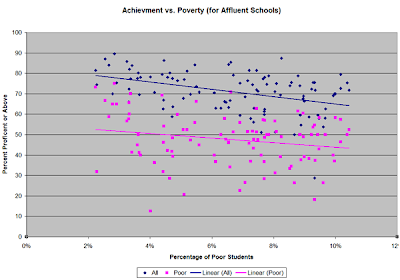 The pink squares are poor students and the blue triangles are all students. I even included the regression lines to make the comparisons easier.

The Neal bussing plan looks like it's not going to work out after all. And, in case you were still wondering what would happen to test scores; the answer is nothing would happen. Affluent schools aren't any better at teaching the poor than poor schools. Whichis not to saythat there is not much room for improvemnet in most schools, rich or poor. There is.

NCLB is but the latest of endless schemes to improve the public schools in the mistaken belief that if only teachers, principals and administrators would do a better job the product, our children, would improve.

The figures on test scores and poverty should give us clear direction on how to “improve the schools.” It’s simple. Take the kids out of poverty.

This might be the worst editorial I've seen this year.
Posted by KDeRosa at 11:09 AM

Good points, but I beg to differ in one respect: yes, poor kids perform badly compared to more affluent kids, regardless of school poverty level. But if your run your regression line out farther, into higher poverty schools, you'll see the achievement of those poor kids continue to decline. This is not to advocate busing, but there's no question in my mind (and I'm releasing a study of Denver schools next week to prove it)that socio-economically integrated schools are a hell of a lot better for poor kids than are high poverty schools.

I agree that we should expect to see worse performance the further we move down the regresion line. But, I think much of the explanation for that is that the category "poor" includes the "slightly poor" all the way down to the the "deperately poor." And, as we move down the line the mix is changing from more "slightly poor" to more "desperately poor."

I also think that large concentratiosn of low-SES kids tends to lead to total school failure, so avoiding these arrangements might alleviate some of that problem. However, I don't think that social integration is capable of increasing student achievement enough to be considered a viable solution in and of itself.

This entire argument of poverty being responsible for low achievement was put to rest about 40 years ago; that was the Coleman Report issued in 1966.

I had the opportunity last year to read the Coleman Report in its entirety. Commisioned by LBJ, the entire point of the research was to find out what on earth the culprit was behind the low achievement (comparitively) of kids in poverty.

Coleman concluded it was the teaching/quality of instruction.

Still, all these years later, poor Coleman and his seminal report continue to be misread and misused, where folks the likes of Bracey and Ed.Inc cite his work as evidence that lack of resources in the home and community are responsible for the low achievement inherent in poverty. That is NOT what the report says, and everyone should read the WHOLE THING for themselves.

Nice job taking apart Bracey, Ken. I do enjoy (and who doesn't?) a good Bracey bashing now and then.

that socio-economically integrated schools are a hell of a lot better for poor kids than are high poverty schools.

I'll look for the details in your report but I'm wondering if you're even measuring the opportunity costs that are foregone by the student body of the school which accepts the lower performing students. I realize that the entire focus of modern education has shifted to closing the achievement gap and in the process the notion of maximizing the gain of each individual student has been abandoned but it sure would be refreshing to read a study which makes an accounting of the costs incurred in order to reap the benefits you claim exist.

Oddly enough, there's no data that supports Neal's assertion that we can improve education outcomes by "[taking] the kids out of poverty."

In fact the data shows the opposite:

Families originally living in public housing were assigned housing vouchers by lottery, encouraging moves to neighborhoods with lower poverty rates. Although we had hypothesized that reading and math test scores would be higher among children in families offered vouchers (with larger effects among younger children), the results show no significant effects on test scores for any age group among over 5000 children ages 6 to 20 in 2002 who were assessed four to seven years after randomization.

In contrast, there is data that supports the notion that education outcomes can be improved if "only teachers, principals and administrators would do a better job."

Not if they're operating on the notion that their "innovative practices" are the cause of student achievement in the suburbs. Here's how a hot-shot principal who thought he was an innovator faired as he parachuting into a troubled school:

Principal Parker Land is at the front of the one of the newest, hottest ideas in education. He's part of a rapid response teams of veteran principals, assembled, trained, and then sent by the state of Virginia to take over schools stuck at the bottom. Virginia calls these principals "turnaround specialists."

Reluctantly Land dropped the strategy he'd announced to teachers at the beginning of the school year, that good instruction was "the" solution to bad behavior. Now he had a new plan.

Since October, Land had been spending nearly all his time on discipline. Now his supervisors were telling him they'd expected something else.

And Parker Land put a stop to our filming, saying he needed a respite to get things under control.

Whatever is going on in there, he doesn't want our camera to see it.

My graduate school was highly Kozol influenced, and I am a scientist so I got all fancy with the statistics (as did you) during my tenure there. The thing that I finally got some of the educational theorists to admit to was that there is usually a correlation between the soft-skills necessary for success in school (how to sit in a chair to maximize learning, how to prioritize homework, how to arrange a home study environment, when to advocate for yourself, when to ask for extra help, etc.) with the income level of the household. Apparently, parents with these skills not only go on to have jobs that pay well, but they also pass along these skills to their children, as parents are wont to do.

In NC, there is a program called AVID. I'm too new to the teaching profession to know what AVID stands for, nor to know if this is more widely-spread than just NC. I'm under the impression that AVID teaches these soft-skills to low SES students. I can tell you this, as an educator, I notice a difference between my AVID low-SES students and my non-AVID low-SES students. I think there is some merit to the soft-skills argument.

Just wanted to toss that idea out there in to the mix.