It's Time to Play Spot the Looney 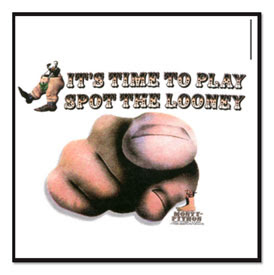 This Week's Education Looney is Philly Inquirer staff writer Susan Snyder for her article in entitled A Phila. school that really works. (hat-tip to commenter Kathy for finding this gem.)

Let's see if we can reconstruct the scene of the crime. Get out your luminol.

Snyder was probably thinking that this one writes itself. All she had to do was visit the school, make a few expert observation, and interview a few expert teachers, and declare a solution to Philadelphia's education woes.

What she wound up with was what all the doe-eyed journalists wind up with when they write about education -- an article full of cliches.

Here are the reasons Snyder gives for Powel's success.

Whatever it was that one of the teachers, Joe Alberti, was doing with his class when Snyder visited:

Using the classroom's Internet-connected smart board, Alberti looked up "ball hawk" and showed students the definition. Throughout the rest of the hour-long lesson, he alternated between reading to students and asking them what different words meant, what they thought would happen next in the story and how they would feel if that happened to them.

Had Snyder visited a few more schools, she would have seen that this is what goes on in 99% of all elementary school classroom nowadays, even the poorly performing ones.

There's something "special" about Powel's environment that makes the students so darn creative:

"It's just the special environment of Powel that encourages kids to read, to be creative, to just be interested in their education," principal Marguerite Holliday said.

"In a way, it feels like a little private school in that parents are very, very active and have very high expectations of us," said Labov, who lives a block from the school and has taught at Powel for 11 years.

Maybe there's something in the water.

Powel has smaller class sizes. While Philadelphia elementary schools have a limit of 30 students in primary grades and 33 in upper grades, at Powel no class exceeds 26. The school's administration has used federal dollars and other discretionary funds to keep classes small. Parents of children at Powel also have pressed city officials to preserve funding.

News alert for Snyder: a classroom size of 26 is not small. And, small class sizes don't really work all that way anyway.

Its teaching staff is stable, cohesive and 100 percent certified. Its student body is very stable, unlike at some schools in Philadelphia, where turnover is a third or more a year.

This is more an effect than a cause. More on this later.

Again, this is an effect, rather than a cause.

An, emphasis on literacy:

In the classrooms, educators say they emphasize literacy and nurture students to care about reading early on.

"We have had a very powerful library program," third-grade teacher Sarah Labov said. "Parents have raised money for books. And teachers read stories to kids all the way up through the grades, continuing that kind of passion."

Powel also conducts school-wide projects, rich in literacy and focused on a theme. For the third- and fourth-grade biography project, students research a famous person, dress up in character and make a presentation.

All this educational nonsense goes on every day in almost every school in Commonwealth, even the poorly performing ones.

Basically, Powel isn't doing anything special. So why does it perform so much better than the typical Philadelphia school? Snyder actually glosses over the real reason:

The school also has the benefit of drawing students from around the city. About 50 percent come from the immediate Powelton-West Philadelphia area, Holliday estimates. The percentage of students from low-income families is also lower than the citywide average (59 percent versus 74 percent).

And that 59% poverty rate of Powel is more than a little suspect. According to these 2007 PSSA results, only 42 of the 106 students taking the PSSA at Powell were classified as being economically disadvantaged, That's a "poverty rate" of only 39.6%. This also comports with the 2006 demographic data from School Matters which gives a poverty rate of 43.4%. And, let's put that poverty into perspective, here 's the distribution of household income for the Powel School: 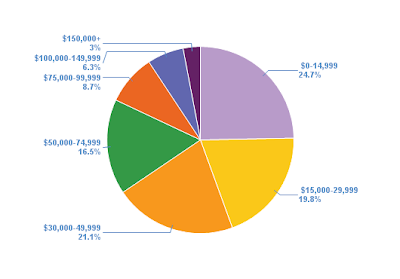 Seems like there are not to many black Tiny Tim's attending the Powel school. The data shows that Powel serves a predominantly middle class, not the black "underclass" as Snyder would have us believe. This is consistent with Snyder's observations: lots of concerned parents, strong parental support, stable student body, stable staffing, and kids interested in their education.

Powel seems to be a slight overperformer based on its demographics. And, that slight overperformance might be attributable to Powel's close proximity to two universities and that it has an undisclosed admission policy to weed out the riff-raff.

The most likely explanation is that Powel does well because of its students. The students don't necessarily do well because of Powel. Snyder has the causation exactly backwards. It's as if she's saying wet streets cause rain.

Powel's teaching methods clearly favor middle-class kids and white kids at the expense of poor kids and black kids. The teaching methods used in Powel are being used nearly every other elementary school in the state. It is these poor teaching methods that aren't working with a large segment of students, especially the poor ones, the black ones, and the Hispanic ones.

Ironically, the very teaching methods Snyder is praising are the root cause of student academic failure.

I compared my school's data against Powell. We are almost exactly the same in grades 3 and 4 but my school is actually slightly higher. We have 62% free or reduced lunches.

I tutor in grades 1 and 2. The first grade room has 22 kids and I tutor 8 students. Now sure of the total number in 2nd grade but I tutor 10 kids in this room.

I find that just about every classroom has between 6-12 kids who need help. Of this group 3-4 need intensive work. The rest of the class is doing fine in balanced literacy. I can go into a kdg room and find the good readers in about 5 seconds. They have their hands up in group discussion, they yell out all the answers, they quickly learn the sight words, have no problems with the BL worksheets and if you cover the pictures in their leveled readers they can still read most of the words and some of the words in their journals are spelled correctly. If you give them 3 sounds to blend they have no trouble at all.

The SDP has a standardized curriculum down to what page you must be on each day. Nothing new is going on at Powell. Every single school in Phila does exactly the same curriculum as Powell.

The article only makes my job harder.

I can't even convince teachers in my school why some kids need something other than BL.

I really hate to be pedantic, especially since you have such a good edublog.

"Tiny Tims" is plural; "Tiny Tim's" is possessive. Sorry, it's my pet peeve.

Check out this article:

Steps to Literacy is a balanced literacy program. The elementary school mentioned in the article failed to meet AYP in Loudoun.

Ok, I'll admit I'm in a hurry and didn't click through to read the entire article you referred to, but what bothers me is the quotes you use from the article only tell me what the teacher does or did. What are the kids doing? Just sitting there? How innovative is that? That type of instruction certainly does not work with our lower achieving/special needs students.

I believe you are spot on regarding this reporter's "treatment".

[There's been a lot of comment on the Colorado Independent's current issue which has a few stories on homeschooling....

Instead look at this blog post at D-Ed Reckoning where a news story about one public school is dissected.]