The State of Black Education in Pennsylvania

In fact it's so bad, I think I mangled the data somehow. Feel free to perform a reality check.

I'm using school district level data from S&P's School Data Direct. Specifically, I'm using the data set from 2005 since it is the latest year containing financial and demographic data. I'm also using scores from the PA State test, the PSSA, for the 11th grade since it represents the end-product of a public school education in Pennsylvania.

With this in mind, let's look at the data.


I've given the mean and weighted mean to show the effect that the Philadelphia School district, which contains a substantial majority of the tested black students, on the data. The numbers in parentheses are the number of tested black students in reading (math numbers were similar).

(A quick word on z-scores: the z-scores are given in standard deviation units. Here's a graph you can use to convert z-scores (white) to percentiles (yellow.) 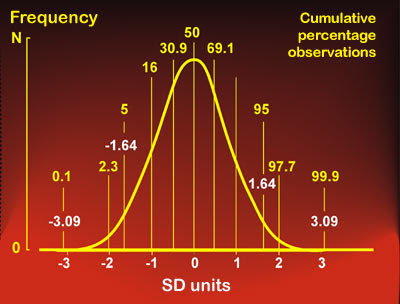 So what does the data tell us?

These ten school districts are not starved for funding. All but two (Upper Darby and Erie City) have total expenditures above the State mean ($11,322). The weighted mean tells us that the mean black student is enrolled in a school with more expenditures than about 84% of PA school districts. So much for racist funding.

I've also given the data for instructional expenditures to give you an idea how much money actually makes its way into the classroom. Unfortunately, Philadelphia's wasteful ways, with instruction accounting for only 36% of total expenditures, brings the weighted mean down to the 36th percentile. This is unfortunate, but as we know from previous analyses school expenditures are only weakly correlated with student performance (and to make Stephen Downes happy: at least in Pennsylvania for at least the year 2005 (feel free to generalize up to your zone of comfort)).

Now let's see how black students are performing in these ten school districts. You better sit down for these numbers.

For State mean (All) I'm giving proficiency scores for all students in Pennsylvania, not just black students.

Talk about an achievement gap. For math, the achievement gap is -2.57 sd and for reading it is -3.54. This means that the mean black student in these ten school districts is performing at below the first percentile. 99 percent of students in Pennsylvania are outperforming them. (Like I said, I'm suspicious of these scores, but I can't seem to find the error.)

These results are fairly consistent across the ten schools. All ten schools perform poorly. The achievement gap tends to be in the neighborhood of a standard deviation, but the gap in most of these schools is double and triple that.

I'm not sure exactly what's going on in these schools, but it's a safe bet to say whatever it is it isn't working for these kids. And, bear in mind that about half of the black students have dropped out by this point, so these scores are likely for the top half of the curve.
Posted by KDeRosa at 11:08 AM

No discussion of school funding mechanisms is complete without an analysis of categorical funds. Generally more affluent school districts receive fewer categorical moneys from the state or the federales, which can be a bummer, but they more than make up for it with local funding sources (everything from property taxes to the PTA).

Low SES school districts end up with total budgets that kinda look equivalent to their affluent peers, but are far more restricted. This results in schools not being able to spend the money where they want it, a lot of money getting spent on products and services that aren't needed just because they are the only thing the money can be spent on, and money not being spent at all.

Looking only at strict dollar amounts ignores variance in local economic conditions as well as the reality that it flat costs more to educate poor kids and ELLs. I'm not saying Philadelphia is spending its money perfectly, just that there's more to it.

TMAO, there is categorical funding breakdowns in the data set and it is pretty much like you explain. The poor and/or title I schools get more funding from the state and feds whereas the more affluent districts rely more on local funding.

[I'm not sure exactly what's going on in these schools, but it's a safe bet to say whatever it is it isn't working for these kids.]

The best education for education commentators would be to actually spend a week or two in these schools. What is going on can not be believed unless actually witnessed.

I am concerned that too much space here is being spent on damning the system rather than fixing it.

How about a strategy of organizing parents in some of these districts?

School boards are elected, after all.

What would be the elements of a) the best political solution and b) the best educational solution?

"I am concerned that too much space here is being spent on damning the system rather than fixing it."

Just because an article isn't prescriptive doesn't mean that it's idle fingerpointing. It's just an earlier - and necessary - step in the process.

I'm not surprised by these numbers, and I doubt that your calculations are wrong: a quick look at the NAEP TUDA (major urban districts) data in science, for example, shows a stunning gap between blacks and others.

And here's a sunny thought: these kids who we've never figured out how to teach? There are about to be a lot more of them. According to Pew, the white student population has dropped from 66.1% in 93/94 to 57.1% in 05/06, with further reductions on into the future. Granted, much of the minority population growth is in the Hispanic community, but we've hardly done gangbusters with them either.

The days of hiding behind aggregate numbers are over, both due to the disaggregation of data and the shrinking of the white/Asian percentage of the population. We'll see what happens as a result.

>>>>"I am concerned that too much space here is being spent on damning the system rather than fixing it."

Just because an article isn't prescriptive doesn't mean that it's idle fingerpointing. It's just an earlier - and necessary - step in the process.<<<<<

It is idle finger pointing.

I think we need to stop slapping ourselves on the back for our ability to perceive the nearly obvious truths about our current monopolistic educational system's failures.

I don't see how endless posting is making much headway convincing people whose self interest dictates that they maintain ridiculous opinions.

After linking to your blog, it looks like you are supporting some clear headed folks for Ridgewood school board

But they don't have any endorsements on their campaign website. Just a bunch of rational but fairly obvious campaign points.

The people running the current system have an incentive to be ignorant so it is easy to look brilliant by comparison. School board members aren't elected who have rational beliefs about education and that's the problem.

We need to be discussing political strategy. The problems that plague our educational system are pretty obvious -- in many cases, so are the solutions.

What's not obvious is how to change the system.

I think parent organizing might be an important first step.

"This means that the mean black student in these ten school districts is performing at below the first percentile. 99 percent of students in Pennsylvania are outperforming them."

So ... we've got 70% of the black students in Pennsylvania scoring, in aggregate, in the bottom 1%.

But the census bureau says that Pennsylvania has a population that is 11% black. The country as a whole is 13% black.

What is the universe against which these kids are scoring at the 1% level?

I think we need a story to explain cramming about 7% of the students into the bottom 1%. No?

I'm not a parent or a certified teacher/admin, so I fail several different litmus tests.

We've all met some wonderful folks who are like-minded and share the same seriousness of purpose. I disagree that most in education think these problems are obvious, though.

Quantitative scores on the GRE suggest that few teachers have the knowledge to understand [let alone work with] data. If it goes beyond standard deviation, they don't get it. The real implications and analysis that kderosa points out here - beyond the title of the post - would be entirely lost on the average educator. That doesn't bode well for a mission that rests on the ability of stakeholders to consider what we might think is obvious.

Then there's that pesky implementation problem.

Political action is necessary, but at this point the options are generally limited to local politics. There may be some inroads at the state level - depending on the state - but those who are in the best position to take advantage of the popular NCLB-dissent aren't the ones I want calling the shots.