Back in January I was confused over the Washington Post's claiming that the the D.C. public schools only spent $8,322 per pupil. Big city public schools in the U.S. are some of the most lavishly funded schools in the world and most likely in the history of mankind. Though you'd never know it by the dilapidated facilities and floundering student achievement.

Andrew Coulson of the Cato Blog has crunched the numbers for D.C. and came up with a per pupil spending number of $24,606. That's obscene.

There are quite a few people that still think that you can improve education outcomes by just throwing a few more dollars at the problem. I don't think these people realize just how much money they'll need to throw at the problem because $24,606 doesn't appear to be enough.

Today's chart courtesy of data from the U.S. Census should give you an idea just how much money we continue to throw at the problem year in and year out. 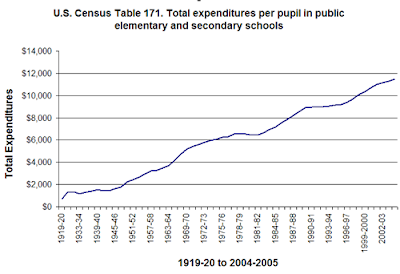 These are total expenditures in constant dollars (i.e., adjusted for inflation) for public schools. In other words, this is what we actually pay per student based on daily attendance numbers. Basically, the amount we spend on public education has doubled in real dollars since the early seventies.

Has any other product or service doubled in price since then?

Not gasoline.
Posted by KDeRosa at 8:26 AM

Have you crunched the numbers on candy bars? When I was a kid, a convenience store Hershey bar was $0.20 (I remember being unhappy when it rose to a quarter!). Last time I was in a 7-11 it was more like $0.79. Obviously you can still sometimes find sale prices at grocery stores. I guess you can find discount education some places too....

Crunching the candy bar numbers is easy. Check out this inflation calculator.

For example, a candy bar that cost 20 cents back in 1975, actually cost 79 cents in 2005 once inflation is adjusted for. This means that if you were eating your 0.20 candy bar in 1975 it was the same price in 2005. If our public schools were making and selling the candybars with the same efficiency that the educate, you'd be paying double, about $1.58, for the same candybar. Eat up.

Spending over time is interesting, but I think you also have to consider where the spending goes. Even though there's always room to improve, I'm pretty sure that we're getting significantly better output than in the past, both in overall student performance and subgroups like special education.

You'd be hard pressed to find real data that supports that argument.

Just a nitpick: as far as I can tell, the source of the spreadsheet and the data on it comes from NCES, not the US Census...

To the best of my knowledge, a large portion of the money spent on DC public schools students goes to special education students.

Part of this is due to the large amount of outsourcing DC does: it sends its SpEd students to private schools, rather than educating them within the school system, which I understand is generally cheaper (no comment on the effectiveness/quality of either method).

I'm interested in seeing numbers for how much money is being spent on non-special education students in the DC system - e.g., the ones actually attended the DC schools. Also, how much is going to school buildings, teachers and supplies - and how much goes to Central Administration?

I remember we complained for months when cigarette machines went up from $0.35 to $0.50 a pack.

"Has any other product or service doubled in price since then [1970]?"

Major league baseball ticket prices are up about 66% in real terms since 1970. My guess is that a good place to look for a double is in luxury goods. Housing doesn't have a double, once you adjust for quality differences (especially house size).

Movie prices, surprisingly, haven't gone up in real terms (but the official data *does* look suspicious ... I suspect that Matinees and rural prices are lower than what I see).

I don't even know how to measure medicine. The quality of 1970s medicine was so much lower than 2008 medicine (arthroscopic surgery, for example).

But we don't see the same rise in spending if we do it as a percent of GDP. Look here: http://www.edpolicythoughts.com/2008/04/has-education-spending-really.html

Since 1940 our country has spent just spent just under a dollar per pupil for every billion dollars in GDP almost every single year (there was a drop during WWII).

"But we don't see the same rise in spending if we do it as a percent of GDP."

I think the point is that keeping the cost of something steady (after adjusting for quality and quantity) in terms of percent of GDP is unusual. *MOST* things are dropping (which is why we are richer than we were back then).

But we don't see the same rise in spending if we do it as a percent of GDP.

If things are dropping in price relative to GDP then the country has more discretionary income and that money must be going somewhere (and we know it's not being saved). So this extra money is being spent on something -- and it's not education, relatively speaking. An argument can be made that it should or shouldn't be spent on education, but it's interesting and informative to look at things in different ways regardless.

Thanks for explaining Corey. The big gainers in terms of share of GDP spent over the last few decades have been healthcare and the elderly.