Keep your eyes on the Gering Public Schools district in Northwest Nebraska. 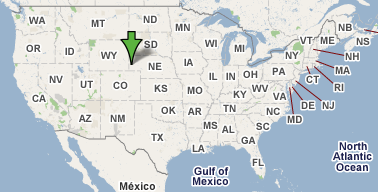 Gering, a smallish 2,000 student district with 30% ethnic minorities (mostly non-ELL Hispanics) and with 43% of students on free/reduced lunch, was an underperforming school district back in 2002 when new district administrator, Don Hague, decided to do something drastic (and smart) with the district's new Reading First grant. Hague didn't just adopt a new research-based basal reading program for Gering, he didn't even adopt a research-validated reading program, he went whole hog and adopted a district-wide research-validated whole-school reform. Like I said, a smart move because most administrators would only have done the bare minimum needed, having the least amount of changes, to give the appearance they're doing something to solve the problem. Real reform requires more serious effort.

Hague also wisely chose, Direct Instruction (DI), as his whole-school reform and implemented the reform with the assistance of the National Institute of Direct Instruction (NIFDI). It's a wise choice because DI has a proven track record of success in grades K-3 along with some longitudinal data for grades 4 and 5. By adopting the whole-school version of DI, there is strong likelihood that Gering students will acquire all the fundamental skills they need for learning content area sbject matter starting in sixth grade.

After three years, Gering is already starting to see results.

The district, not content waiting for the elementary students receiving DI to reach junior high, adopted the remedial DI reading program for its junior high students to improve their chances of succeeding in high school. After one year of remediation, Terra Nova scores went from a 39% pass rate to a 55% pass rate. That's an effect size of about 0.4 standard deviation (σ). Let's put that in perspective.

A 0.4σ improvement is about 60% better than the gains made in the Project Star class-size reduction study. And, in order to get similar gains via improving teacher effectiveness, you'd have to replace teachers with an average effectiveness at the 50th percentile with super teachers performing at the 94th percentile.

I've been in contact with Gering and NIFDI trying to get some additional data for the intervention and plan on reporting any results and answers I can get. In the meantime, take a look at the short documentary on Gering that was produced. Note in particular, the interviews with the teachers and the responses they give, especially with respect to the children's reactions to the intervention.

Continued in Second Post.
Posted by KDeRosa at 1:04 PM

Very cool. I loved looking at the snippets showing how it actually works in some classrooms.

Okay, now I feel really silly for breaking down like that was some tear-jerker movie.

Well, kind of silly. To tell the truth, I'm not really sad that true stories of a school turning around, and kids starting to really learn in an efficient manner, has more of an emotional impact on me than when Old Yeller dies.

Cool stuff. Many of the classroom shots in the video show how DI is implemented outside of beginning reading instruction, i.e., 2nd grade and higher, which is something that hasn't been shown very often before this.

We rarely see a school, let alone an entire district, make substantial real improvements in students' academic performance, like we see in the video. It is good to see a real success story.

I have seen some of the additional data that did not make it into the video and it is impressive. I will be posting on that in the near future afer I've gone through it all.

"Evidence?" said the educrats. "We don't need no stinkin' evidence. We got your evidence right here."

I was watching for it in the video, and I saw it. Wow.

In the script, both of these things seem so odd to me. In the video, not so much. The "get ready" prompt seems like a cue that is phased out more or less, depending on the teacher (other things, like pen-slapping-book take its place; other times, nothing) but even when it was in evidence, it seemed fairly natural, so I presume students are oriented to it in some way.

Still, both of those elements--the prompt and the whole-class response are profoundly interesting to me.

You, sir, are exactly right.

They call it a "signal" and it's supposed to elicit a unison repsonse response from the entire class so the teacher gets accurate feedback from every student (12-18 times a minute). You don't want the higher performers jumping the gun and tipping off the rest of the class to the answers and you don't want the lower performers parroting the answers from the rest of the class. It sounds silly until you know the underlying reason and see it is use.

Check out the why use signals video in case you haven't already.

Wow, what a shocker to everyone except colleges of education and some teachers who've bought into their horsepuckey: when you teach students *content,* they tend to learn.

Can you help me figure out the standard deviation effect size of the KIPP program?

By providing effective instruction (such as DI) and extending the school day and year only for those students who need it we ought to be able to close the achievement gap.

Poor instruction and a needless short day/year essentially hold back advantaged students, making it easy to catch up with them, right?

Anon, I need to see the study.

Anon II, closing the achivement gap under NCLB only means getting the same number of students in each subgroup above a threshold, not that each subgroup necessarily scores the same.


I am currently teaching my son with Engelmann's "Teach your child to read in 100 easy lessons", which is a DI-based program.

Not only does the script indicate to say "Get ready", it's actually important to do so. Not that I think the words themselves are critical, but it needs to be standard and noticeable to get the kids to focus immediately incident to performing. I notice my son responds far better when I say it specifically than when I just point or something.

The main problem I have is that he doesn't know spoken English very well at all, so to a certain extent I'm literally teaching him decoding of meaningless sounds. Nevertheless, he's improving and I know that once his spoken English catches up the reading will be natural.

I have a child in this system, and am not happy with it. I believe that we are bringing up the low end students. But we are also holding back the high end students. Of course the gap is narrowing.

What's your basis for this belief, anon?

Gering appears to be implementing the program with fidelity. This means that the higher-performing students will be grouped together and will be permitted to proceed through the program at a pace that should be at least 25% faster than the average students. Without a program like Gering, educators typical group all the children together regardless of ability which means that instruction gets directed toward the averge student and, as such, the pace will be slower since the average student learns at a slower pace.