One of the programs being used in Gering is the DI writing program Reasoning and Writing (RW). Here's an overview of the program.

Levels A and B get students ready for real writing. Level C concentrates on narrative writing. Level D focuses on expository writing. Levels D through F are no walk in the park, even for higher performing kids. In fact, I'll go so far to say that most people are never taught and never learn the skills taught in the latter levels of RW.

Most people are simply unable to critically example text or a presentation of information and construct a coherent argument based thereon. Reading blogs and the comments section makes this fact abundantly clear. And the demographic that engages in such activities is highly skewed at the top of the cognitive curve.

What I like about RW is that it teaches grammar and logic in the context of writing. As students learn grammar they immediately incorporate what they learn into their writing assignments. Every lesson has a writing assignment.

For example, by level C, lesson 89, students are learning how to properly use pronouns in writing (jack and Jill = they), how to punctuate a series of nouns (bat, ball and glove), and how to construct paragraphs with multiple people speaking (a paragraph per speaker). The writing assignment for this lesson is based on the following series of pictures. 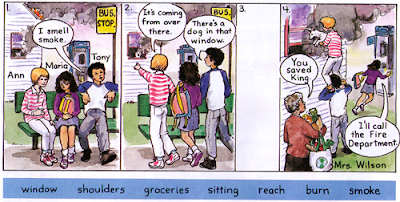 The assignment is for the students to draft a multiple paragraph narrative based on the sequence of events that take place in pictures 1, 2, and 4, including what must have happened in missing picture 3.

The students start off by setting the scene by writing where the people were, what they were doing, and what was happening in the background in the first picture.

Ann, Maria, and Tony were sitting on a bench at a bus stop. A house was burning behind them and smoke poured out of the window. Tony said, "I smell smoke."

Next, the students write about what happened in the second picture.

They stood up and faced the building. Ann pointed to the window and said, "It's coming from over there."

Tony said, "There's a dog in that window."

They went over to the window. Ann climbed onto Tony's shoulders, reached into the window, and grabbed the dog. Ann held the dog in her arms. Mrs. Wilson arrived home holding a bag of groceries. She said, "You saved King."

As she ran to a telephone booth, Maria said, "I'll call the fire department."

By the end of level C (lesson 110), students will be able to construct simple multi-paragraph narratives based on a sequence of events like this example.

As you can hopefully see, this lesson has far more instructional value that the typical journaling exercises elementary school students typically engage in.

And, yes, I wrote those paragraphs all by myself. The question is will my second grader do a better job than me when he does this exercise tonight.

Update: Here's what the boy wrote for this lesson. I only corrected a few spelling errors.

Ann, Maria and Tony were sitting on a bench at a bus stop. There was a house on fire behind them. "I smell smoke," said Tony.

Maria, Ann, and Tony stood up and looked behind them and saw a house on fire. "It's coming from over there", said Ann.

"There's a dog in that window," said Tony.

They ran to the house and Ann got on Tony's shoulders. Then Ann grabbed King while old lady Wilson came with groceries saying, "You saved King."

Ken, you've cut your second-grader way too much slack.

Permit me to propose narrative for panel 3:

Ann: "Maria, Call the fire department! Tony, can I stand on your shoulders to reach the dog?"

"Levels D through F are no walk in the park, even for higher performing kids. In fact, I'll go so far to say that most people are never taught and never learn the skills taught in the latter levels of RW"

I've some data to support that. For two years running we gave the placement tests for R&W to our middle school (6th-8th grade general ed classes) and only about a half dozen -- of around 375 -- placed in Level E, none in F, and the rest split between C and D.

For those not familiar with the numbering, C is for second grade (3rd at the latest). The most common errors were run-on sentences (I mean pages long), incoherence -- no order or sequence; verbs in all different tenses and not agreeing with subjects, absence of connectives, no paragraphing, and of course -- spelling and conventions abysmal. After all spelling doesn't count.

It was quite shocking and really gave the administration a pedagogical heart attack. These were not stupid kids but they were not going to be successful in high school with writing skills like that -- and the much-vaunted "higher level thinking" was nowhere in evidence.

Lots more work on writing since then!

That sounds cool -- do you know where you can get a sample or see a sample lesson for higher-level grades?

According to the DI teachers instruction, you have two run on sentences. To many "ands". It's a good effort. I'm sure your son will do as well.

I know. You're not supposed to write compund sentences at this point. My son actually has a real run-on sentence and a penchant for complex constructions as well.

No, it's useless without the Teacher Presentation Book (n.b. not the same as the "teachers guide.")

Because they have recently come out with a new edition, it is likely you can find the earlier edition relatively cheaply on E-bay or one of the other used book sites. The other thing you need, though, to do it effectively with your own child, is the placement test. You can't necessarily go by what grade your student is in. The placement tests may be online somewhere (I will check).

You need the TP book because it contains ALL the vital information on how to present the tasks, what errors to look for, what to do in various instances, what the criteria are for mastery, and so forth. It's following that tightly-crafted instructional sequence that delivers the superior result. The books and exercises though excellent, are not the magic bullet -- the instructional interaction is.

On E-bay, you can set up a standing search for an item (say, "Engelmann" and "Reasoning and Writing") and you will be notified when an item is listed that matches your criteria. That way you don't have to keep checking E-bay and searching. You can also re-sell pretty well any DI program for nearly what you paid for it, so it is not a permanent financial outlay.