What Should Students Know and be Able to do?

Karl Fisch asks and then unsatisfactorily answers one of education’s most important question.

What should students know and be able to do?

It gets back to an old argument in education, the argument about which is more important -- content or skills. Like most teachers I've talked with, I think that's a false dichotomy. I want both. I want students to know some content and have the skills to be able to use their knowledge. I don't want them to just "cover" the material, I want them to uncover their own understanding, and to think critically about the content.

That’s a pretty good start.  But then comes the “but.”  There’s always a “but” in education in which the pundit reverses what he just said and lets slip his real opinion.

My bias, however, is that too often in schools we err too much on the side of content.

The tell.  Fisch is confusing what he thinks he’s teaching with what his students are actually learning. I’ll tell you that what they’re not learning is too much content.

Let’s look at what we know about expert problem solving.  In particular, let’s look at:

The first thing we’d like to know is what do we do when we solve problems.  The article provides a helpful breakdown of the process.

Most theories of human problem solving consist of some
formulation of the following seven stages:

These stages may not be strictly sequential, but may be
iterative.

And, for you visual learners. (That’s an education joke. Har har.) 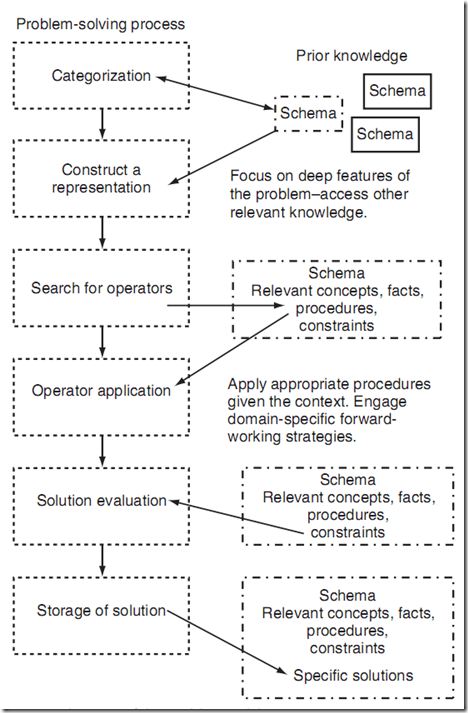 Today, let’s focus on the most critical step – categorization of the problem.

Problem categorization is the most critical step because it impacts all subsequent steps, such as determining what knowledge is relevant to solving the problem and what strategies are needed.

For example, after a statistician categorizes a statistics problem as a permutations problem, she or he can proceed by retrieving and applying the appropriate formula to solve it.

So, what do we know about how experts categorize problems. Quite a bit actually.

Much research has shown that experts’ domain knowledge actually influences problem perception. When experts are presented a problem or task relevant to their domain of expertise, they see the problem in terms of prior meaningful patterns of information.

I highlighted the important bits.

Let me translate.  In order to properly categorize a problem, you need to already know and have meaningfully thought about the relevant underlying content knowledge.

These results are found across many different domains: architecture
(Akin, 1980), mathematics (Silver, 1979), and naturalistic decision-making (NDM) tasks such as a fireman determining the safety of a room in a burning building (Klein, 1998). Expert doctors are more capable of identifying the correct size and shape of abnormalities from the same lung x-rays than novices.

Experts perceive the problem very differently than novices when presented with the same stimulus.

Experts sorted them according to their underlying physics principles, such as Newton’s second law, whereas novices sorted them based on their surface features such as inclined planes or pulleys.

Similar results have been shown in mathematics

where novices categorized algebra problems on the basis of the problem content (e.g., river problems), whereas more experienced students categorized them based on the underlying equation or principle (Silver, 1979).

and other fields.    Here’s the explanation given by the authors.

These results have typically been explained by the hypothesis that experts’ problem schemas are organized differently than novices. Schemas are hierarchical knowledge structures that include prototypical information about the type of problem, including declarative knowledge of objects, facts, strategies, and constraints, and may also include the procedural operators for solving the problem (Marshall, 1995). Expert schemas are hypothesized to include many principle or structural features of the problem type, whereas novice schemas include few structural features and shallower, surface features.

So when Fisch says he wants his students to “uncover their own understanding, and to think critically about the content,” the research suggests that his students won’t be able to do this very well until they know a lot of content knowledge, and know it well, or they won’t be very good at initially categorizing their problems well—the first step in finding the solution.

In contrast, Fisch, a professional educator, admits his bias is that schools already teach too much content.  Where do you suppose he got a notion like that?  Of course, if Fisch knew the first thing about knowledge and learning, he’d know that the problem isn’t that his students know too much content knowledge, but that they don’t know what they think they know well enough.

Fisch goes on to justify his bias against teaching content knowledge by claiming that we live in “exponential time” with too much knowledge to learn and that it’s already “easily accessible”  via the internet.  Why learn it, when you can Google it seems to be Fisch’s mantra.  Unfortunately, human cognition doesn’t work that way.  If it were the case, you’d be able to easily Google the following simple physics problem:

A ball is kicked from a point X m away from the crossbar, where X is a number between 38 and 39 that you select. The top of the crossbar is 3.05 m high. If the ball leaves the ground with a speed of 20.4 m/s at an angle of 52.2º to the horizontal? (The usual assumptions apply: uniform earth gravity, no drag or wind, the ball is a point)

a. By how much does the ball clear or fall short of clearing the crossbar?

b. What is the vertical velocity of the ball at the time it reaches the crossbar?

Bet you can’t unless you already possess quite a bit of physics and algebra knowledge and skills.