... that this Study will be played up big big big when it gets published in the fall. Maybe you can figure out why.

The study was sponsored by the International Association for the Evaluation of Educational Achievement (IEA) and coordinated by High/Scope Educational Research Foundation. Results of the study, which will appear in the Fall 2006 issue of the Early Childhood Research Quarterly, identified four teaching practices that were consistently related to child outcomes across all 10 countries that had data at age 7. Controlling for family and cultural influences, researchers found the following:

1. Children's language abilities are enhanced when early childhood teachers allow them to choose many of their activities on their own.

2. Children fare significantly better in language skills development with teachers who have achieved a higher level of education.

High/Scope was founded in 1970 by David Weikart, who launched the groundbreaking High/Scope Perry Preschool Study. Initiated in 1962 and lasting over 40 years, the study found that a high quality early childhood program exerts a dramatic impact on the lives of poor children, improving their educational success, increasing their adult earnings, reducing their criminal activity, and returning nearly $13 to taxpayers for every dollar invested in the program. High/Scope's educational model, in which children plan, do, and review their own learning activities, has been validated by longitudinal research studies and has influenced a generation of educators and policy makers. An independent nonprofit research and development organization, High/Scope has helped lead worldwide educational reform through its evaluative research, curriculum development, teacher training, publishing, and communication.

Have you figured it out yet?

Journalists, being idiots, won't notice this potential bias. Nor, will they do any background research which would show that when High/Scope was actually researched in an independent study, Project Follow Through, it performed significantly worse than the control group and embqarrassingly worse than the winner, Direct Instruction. High/Scope is listed as "CogCur" on the following chart. 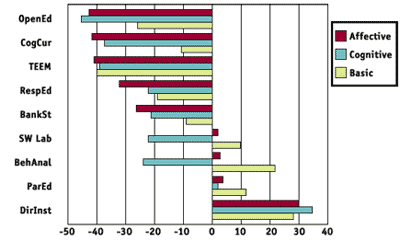 Odd, that a curriculum that purports to be able to increase cognitive ability had some of the lowest cognitive scores. Giggle.

Funny how the only time High/Scope gets positive results is when they cook the books conduct the experiment themselves. It won't be the first time their research was suspect.

It won't be the last time either.
Posted by KDeRosa at 4:29 PM

Good information. I will remember this when it appears in my hometown to justify yet another foray into constructo-land.

I wonder if I can come up with ten?

You know it isn't research when:

10) you can count the sample size on your fingers and have a couple left over.

8) critics are all ideologically-driven.

7) it results in an exciting, new program by the researchers that's sure to draw some serious grant money.

6) results evaporate when the research is conducted by anyone outside the "school of thought".

5) critics are all insane.

4) it results in proof that the only solution to a problem is more funding.

2) it has a title that sounds suspiciously like it comes from this web site.

1) critics are all ignored.

My guess is that this is a socio-economic effect. The children of richer parents have both better outcoems and more equipment and material available.