Took the family to Cape May, NJ for a little vacation.

We stayed at the Inn of Cape May, a 113 year old Victorian Inn. 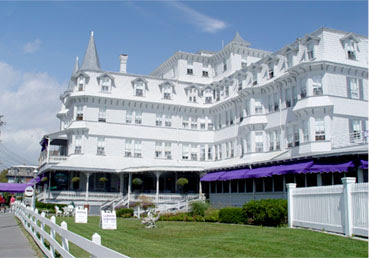 Because we made reservations so late, we got stuck in the fancy (i.e., more expensive) room all the way up on the tippy top (the fifth floor). Normally, this is a bonus, but the Inn lacks a full time elevator which means walking five flights of stairs--Victorian Style.

The inn is very charming in a late 19th century sort of way. All weekend long I wanted to don (and then doff) a monocle, wax my moustache (and grow one), and go on at length about the Union and Pacific Railroad. The Inn has been updated with many, but not all, modern amenities, such as electricity, private baths showers, and air conditioning.

The renovations are, shall we say, less than perfect. The A/C unit is guaranteed to wake the dead as it cycled through its refrigeration cycle, though it did manage to keep the room cool. The retrofitted private bathroom was tiny and made a small room feel even smaller. The old public bathrooms (at the end of the hall at each floor) are still there as a ghostly reminder of less affluent times. And the electricity was added the cheap way - by running conduit on the outside of the walls. Even then the electric outlets were few and far between.

Nonetheless, it's nice to see how bad the "rich" had it 100 years ago. No one would mistake the pre-renovated Inn for squalor, though the lack of bathrooms and electricity would certainly cause modern day poverty hustlers to agitate for better living conditions. We don't realize how good we have it today.

We also took the kids on the obligatory trip to the Wildwood boardwalk one night. Bit of a let down after visiting DisneyWorld last year, especially considering it was just as expensive.

The Northeast elites are fond of disparaging middle America as being unsophisticated. They need to visit their own amusement parks before casting such aspersions. I saw lots of tattoos, piercings, obesity, and bad manners, not to mention expensive cell phones, clothing, hair styles, and sneakers among the boardwalkers. Poverty is not what ills these people.

And, don't get me started on the nanny state hi-jinks that is New Jersey.