The Vision of the Anointed 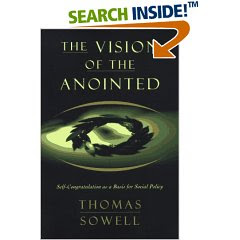 During my vacation weekend I read The Vision of The Anointed by economist Thomas Sowell.

It's not directly about education.

But, it's all about education, if you know what I mean.

Education is full of the self-anointed elite, and their numerous followers, who make education policy and whose prevailing social vision is "dangerously close to sealing itself off from any discordant feedback from reality." Hence, the hatred of testing and NCLB which mandates such testing.

It's not so much that their views are especially evil or especially erroneous (though they certainly are erroneous). The problem is that the ignoring or evidence and feedback permits the blind following of a dangerous course of action to a fatal conclusion until you wind up with a majority of students who can neither read nor perform basic calculations at an acceptable level of proficiency.

Sowell explains the danger of this mindset:

Even when issues of public policy are discussed in the outward form of an argument, often the conclusions reached are predetermined by the assumptions and definitions inherent in a particular vision of social processes... To a remarkable extent, however, empirical evidence is neither sought beforehand nor consulted after a policy has been instituted. Facts may be marshaled for a position already taken, but that is very different from systematically testing opposing theories by evidence. Momentous questions are dealt with essentially as conflicts of visions.

Sound familiar? Or, how about:

The focus here will be on one prevailing vision--the vision prevailing among the intellectual and political elite of our time. What is important about that vision are not only its particular assumptions and their corollaries, but also the fact that it is the prevailing vision--which means that its assumptions are so much taken for granted by so many people, including so-called "thinking people," that neither those assumptions nor their corollaries are generally confronted with demands for empirical evidence. Indeed, empirical evidence itself may be viewed as suspect, insofar as it is inconsistent with that vision.

Lots of good stuff which will make for good blog fodder for months to come. In the meantime, go pick up a copy and read it.

Once you understand how the anointed think, its much easier to dissect their "visions."
Posted by KDeRosa at 12:24 PM

Coincidentally, I just finished this book myself recently. I agree it is a must read. One of the best quotes is:

“What is at stake for the annointed in their discussions of public policy issues is their whole image of themselves as people whose knowledge and wisdom are essential to the diagnosis of social ills ... They must believe that they know — and that they know better than others.”

Good book. I read it a couple of years ago.