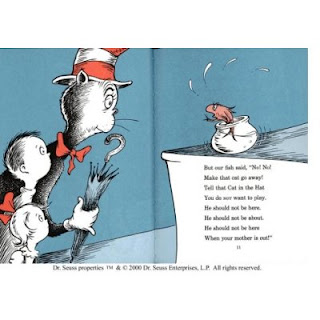 It's the 50th birthday for Dr. Seuss' The Cat in the Hat. So U.S. News and World Report is running the obligatory puff piece commemorating the anniversary. In paragraph three we learn this little tidbit.

236 words. Geisel had been publishing children's books for 20 years when Cat was published in March 1957; early titles included the classic Horton Hears a Who! The particular endurance of Cat, many critics say, is owed partly to its origins in an emerging philosophy of phonetic learning. Most of the 236 individual words in the book were taken from a list of beginner words for new readers, and only a few are more than one syllable.

Dr. Seuss responded to this “challenge” by rigidly limiting himself to a small set of words from an elementary school vocabulary list, then crafted a story based upon two of the words which rhymed—cat and hat.

Dr. Seuss' books were created to supplement the 'look say' reading programs taught in schools. Dr. Seuss' publisher supplied him with a sight vocabulary of 223 words which he was to use to write his books, a sight vocabulary that was in
harmony with the sight words the child would be learning in school.

In an interview he gave in Arizona magazine in June 1981 Dr. Seuss claimed the book took nine months to complete due to the difficulty in writing a book from the 223 selected words. He
continued to explain that the title for the book came from his desire to have the title rhyme and the first two suitable rhyming words that he could find from the list were 'cat' and 'hat'. Dr. Seuss also regretted the association of his book and the 'look say' reading method adopted during the Dewey revolt in the 1920s. He expressed the opinion that "[...]killing phonics was one of the greatest causes of illiteracy in the country."

I think some of U.S. New's editors must have learned to read using "Look-Say."
Posted by KDeRosa at 11:32 AM

Thank you for that explanation behind the creation of 'The cat in The Hat'. It's fascinating to know the history behind such famous work.

I'd like to know- what is the source of those paragraphs? They are a separate quote, but I don't see the source.

I believe th source was th e interview that he gave in 1981 in Arizona Magazine. See the Wikipedia entry I linked to and this post for the full quote.