I would hold that, for whatever reasons, blacks are not yet receiving effective instruction. 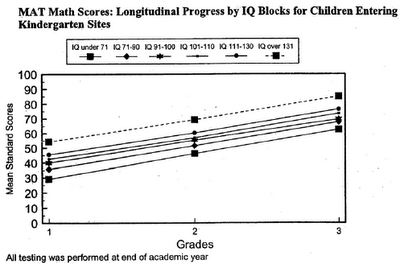 And, there's good reason to believe that, if anything, higher-IQ students would benefit even more from better instruction:

Figure 5 shows the math performance (in standard scores) of DI students of various IQ ranges (from over 131 to under 71) as they progressed from grade 1 through grade 3. The lines are parallel, suggesting that the same rate of the students in achievement was realized for all students. This outcome is partly an artifact of the priorities of the DI model, because it focused disproportionately on the lower performers, those students less likely to succeed. With more emphasis on the higher performers, their performance could have been accelerated more dramatically.

So, there's good reason to believe that increasing the effectiveness of instruction across the board would lead to a widening of the "achievement gap" between groups, incidentally demolishing another point Jerry was trying to make in his article.

NB: the skillful use of passive voice in Jerry's quote. I suppose it was too painful to write "schools are not yet effectively educating blacks." Kinda like in that episode of Happy Days when the Fonz couldn't admit he was wrong and couldn't even say the word.

Wait a second. Let me get this straight.

You are saying that effective instruction will also increase the improvement of higher IQ or higher perfoming kids too -- as well as the lower kids?

Now, there is a concept:
Effective instruction... will increase achievement rates... across the board?

As Bracey points out, the gap in this situation will persist. Only now we'll have a gap between the proficient and the high achievers, instead of the gap we currrently have with the low and proficient achievers.

That is not "eliminating the gap", my friend!

Bracey, also points out that those cut points are merely arbitrary. So even though Brookings looked at the math questions on the supposedly difficult NAEP and found that most questions were far below grade level, that doesn't mean anything.

The cut points are arbitrary and that's that. though in this case "arbitrary" seems to be code for "below grade level."

This is just crazy. I just can't believe that if something as effective as that curriculum existed that it wouldn't be used everywhere. This is just a bunch of right-wing rhetoric designed to sabotage a man who has dedicated his life to the ideals of a REAL education for children. Gerald Bracey is a visionary and I'm sure he can provide just as much evidence to show what he's done for poor and minority students as that Engleman character.

Bracey a visionary? Ha ha, that made my day. He is on record as saying we have to keep churning out an illiterate underclass or else -- horrors -- our economic system (predicated on having a large pool of ignorant, insecure consumers with no access to power) would be in danger.

That "vision" slipped through in one of his earlier "Bracey reports."

I've been on several of his lists for years and never seen even ONE remark from him that showed:
-- any knowledge about instructional matters
-- any concern for *real* kids as opposed to reified abstractions.

I say it's time to re-think that system (before the rest of the world does it for us). One way to subvert the inequities of the status quo is to ensure that the low achievers GET effective instruction -- then they will have the option of being participators, not victims.

Love him or hate him, Engelmann is definitely propelled by a passion for the underdog and for helping kids learn and take charge of their lives (see www.zigsite.com). Can't say the same for our ole pal Jerry. His mantra is, "We can't start teaching the kids until we solve world poverty, dietary habits, medical problems, dysfunctional families, global warming, ingrown toenails...."

Thank goodness there are effective tools out there and we can use them NOW.

PS, I'm a left-wing type. There are lots of us who see that real equity means giving minority kids the tools to beat the power-brokers at their own game. Starting with teaching them to read and write -- well.


Being an old liberal type, I always thought that good education (in spite of all "external" excuses) was the only way to fight poverty.

I guess neo-liberals feel the need to use the poor as leverage to score points for their own social agenda. I suspect that the poor would like to be looked at as individuals, rather than a class action suit. Just one more group trying to use them for their own agenda.

"I'm sorry we can't allow more charter schools or give your child a full voucher right now, that would eliminate our leverage. We know what's best for you."

"I just can't believe that if something as effective as that curriculum existed that it wouldn't be used everywhere."

You must not have kids in school. It's always worse than you think. Read the thread on Everyday Math.

"I'm sure he can provide just as much evidence to show what he's done for poor and minority students as that Engleman character."

It sounds like you are buying into a philosophy before you examine the details. Get off the bus and do your own thinking.

It's tempting to think that educationists innocently look in the wrong place to explain low achievement and to raise it.

1. “Schools need more money.” [In fact, the U.S. spends more money on schools than anyone else. The problem is that a lot of money is spent on curriculum materials that aren’t very good.]

2.“Disadvantaged children enter school with too little vocabulary.” [True, but there are preschool and kindergarten language and reading programs that can close the gap.]

3. “Students are unmotivated. They don’t want to learn.” [Did you ever see unmotivated kindergartners? It’s more likely that children become unmotivated AFTER they find out they aren’t learning.]

4. “Classes are too large.” [Ineffective instruction is ineffective no matter how small classes are. Besides, countries with high achievement have larger classes.]

The truth is, they are imbeciles.

Ask any educationist----an education perfesser (esp. one of the illiterate "literacy" hacks, or any dummy perfesser of elementary education. Can you imagine a more lame field?), or a district "curriculum specialist," or a member of one of the organizations that "guide" education (such as NCTE or NCTM)----a series of questions that get to the core of education.

You'll be shocked (or maybe not) at how boneheaded, smug, and just plain stupid these persons are.

They can't give a coherent definition of learning.

"Learning is uh er oh mmm uh what happens when you learn." [Get the ropes.]

They can't list the phases of mastery---acquisition, fluency, generalization, retention.

They can't define a concept, rule, or cognitive routine.


They can't tell you the criteria for logically adequate curriculum design.

"A good curriculum is a seamless web [insane] of holistic experiences experienced in the context of naturalistic and learner-centered activities in a democratic and nurturing community. Howz that?" [Stick your head in the toaster and jump in the bathtub.]


In other words, they don't know anything about their business.

Imagine a physician who could not define cell or tell you how muscles work.

This field does not need more knowledge of how to educate, nor more materials. It needs persons with intelligence. At least common sense, and who don't tolerate any ooompus boompus from wiseass students.

We'd be far better off if we hired late middle aged men and women as teachers, and gave them a crash course in design and effective communication.

And instead of the usual administrators coming out of schools of deaducation, hire retired military.

That's the considered opinion of me and my pal Jose Quervo.

Given my experience around here, I'd say we have a big problem educating high-IQ blacks, too.

My district, as a matter of policy, hires only intelligent young people with potential straight out of ed school.

If they work out, many of them leave to become administrators in other districts.

If they don't work out, we give them tenure and they stay here.

We'll hire older people if they're career changers & are also straight out of ed school. (Against the law to hire a person without an ed degree.)

We did, this year, apparently hire a special ed teacher with some experience. She is doing a superb job with the kids from what I hear. Because of this teacher my friend who had been planning to add another $200/wk to her tutor tab hasn't added a dime.

To my knowledge she's the only teacher-with-experience we've hired in recent years. There may be others, but there can't be many.

We're hiring on the cheap.

We actually refuse to grant interviews to high-paid master teachers looking to move. Won't even talk to them.

And KDeRosa would be right.

Although educated in a Whole Language crap-hole, I was just yanking chains because it's so unbelievable anyone actually consumes his product.

Bracey is obviously a jack-ass who needs to be bitch slapped.