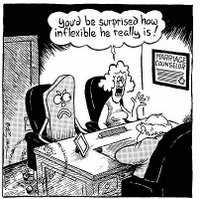 Now that we know how our brains and the interaction between working memory (WM) and long term memory (LTM) work (See installment one), we can turn our attention to how we learn and the stages of knowledge.

When new things are first learned, the mind is biased to remember things in concrete form rather than abstract ideas. Information is tied to superficial surface features and the result is that this newly gained knowledge is difficult to apply to new situations (i.e., situations having different surface features).

Rote knowledge is knowledge devoid of meaning. Inflexible knowledge, in contrast, has meaning associated with it. That meaning, however, is superfiicial and concrete. That's why the knowledge is inflexible and doesn't generalize easily.

Time for an example from Willingham:

The student with rote knowledge might be able to produce the definition but would not understand it. This student, who learned the form without the meaning, wouldnÂ’t connect this definition to the familiar example: Pavlov'’s dog repeatedly hears a bell (conditioned stimulus) before getting food (unconditioned stimulus), whereupon the bell elicits salivation (conditioned response).

Another student might memorize the definition of classical conditioning and how each term (e.g., conditioned stimulus) relates to Pavlov'’s experiment (the conditioned stimulus is the bell). The student, therefore, understands the relationship of the terms (the dog salivates when it hears the bell because it expects the food). We would be more prepared to say that this student had learned the meaning of the term "classical conditioning," and that her knowledge was not rote.

No, the learning is deeper than rote knowledge defines. But at the same time, clearly the student has not completely mastered the concept. The student understands classical conditioning, and she understands the meaning, but this understanding is somehow tied to the surface features of the example learned: dogs, food, and bells. When the example is switched to bed-wetting, her knowledge is rendered unavailable.

Knowledge becomes flexible when it becomes tied to deep structure rather than to superficial surface structure. For example, if you know how to find the area of a rectangle, that knowledge is probably generalizable; you can apply it to any rectangle, and the formula is not tied to the specific examples in which you learned it. You think of using the formula in novel situations, such as determining the total square footage of a hallway, kitchen, and dining room.

Inevitably, the question arises whether this deep structure can be taught directly. So far the answer seems to be no. The mind prefers that new ideas be framed in concrete terms rather than in abstract ideas, making deep structure difficult to teach directly. Anyone who's ever taught anyone anything knows that students like to see concrete examples. This is because their minds need to frame the ideas in concrete terms in order to attach some meaning to it.

Inflexible knowledge is the unavoidable foundation of expertise including that part of expertise that enables students to solve problems by applying existing knowledge to new situations. We call this expertise "problem solving skills." As students work with their knowledge, their store of knowledge in LTM becomes large and increasingly flexible. In other words, the mind's concrete form bias is overcome by the accumulation of a greater store of related knowledge, facts, and examples. The end product of flexible knowledge is expertise which is deep structure of a large domain of knowledge. It is this expertise that we associate with higher-order or critical thinking skills and it can't be taught directly.

Now that we know how knowledge is learned, we can turn our attention to how to get that new knowledge into LTM into the first place. That'll be installment three.

It really sheds light on so many of the new grade school reading programs that want to bypass decoding, phonics, spelling, vocabulary, etc.(or pay very light lip service to them), and go straight to the "deep structure" ideas of inference, transitions, summarizing, etc. There seems to be an assumption that the former will take care of itself.

It seems as though our reading program spends an inordinate amount of time on the "higher level thinking" skills with much less on the basics, as anonymous said. My students (2nd. grade) get, by my choice, less time working in things like inference and more time focused on enhancing phonics/decodiging/vocabulary skills.

I am tempted to copy each of these posts and distribute them to some "key" people around here...not that it would change many minds. :)