Stalinist Airbrushing in the Edusphere 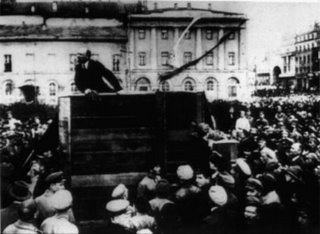 Looks like constructivist nutter, Doug Loon, has engaged in a little digital airbrushing over at his blog Borderland. (I'd link, but the intellectual midget has set up a childish redirect, so just use google.)

Loon didn't like having his precious opinions (as opposed to legitimate theories) challenged and not being able to respond without engaging in postmodern nonsense, thereby opening himself up to even more ridicule, he did the next best thing--he erased the entire incident from the history books.

We have the blog equivalent of a black hole over there now. You can't see the original argument directly, but you can tell it once existed by looking at Loon's other posts (and comments) and the links to Loon's original post.

They're back at their echo chamber blogs now gathered 'round the campfire singing kumbaya and bemoaning the fact that not everyone has drunk the constructivist Kool-aid. Now that their views being challenged, they find themselves between a rock and a hard place--they have to either defend the indefensible, thereby prolonging the pain and looking silly, or refuse to respond to the challenge, thereby looking cowardly and silly.

Looks like they're opting for plan B at this time.

Update: Trotsky lives! The comments are either back up or never were missing in the first place. So my allegations of Doug being a Stalinist airbrusher may have been premature. Narrow-minded censor-yes. Stalinist air-bruasher--no.
Posted by KDeRosa at 8:29 AM

Ah. This is the guy who refused to answer me when I asked why he claimed ed research had to control for socioeconomic status.

On Wordpress blogs when the page gets to be a certain length it posts it in the archive by default. If you scroll to the bottom of the page you will see a link to "Previous Entries" - click on that and continue to scroll down the posts and there is the post you claim he deleted.

It wasn't the post I was talking about, it was the comments. The last time I checked, they were down to 17. Now they are back up to 47. Perhaps it was a glitch or Doug having a change of heart.

It's always been there - your mistake - a different post has 17 comments - you owe an apology, or are you the Stalinist?

I'm not sure I folow your logic, Brain, but I have acknowledged the possibility of a mistake on my part.